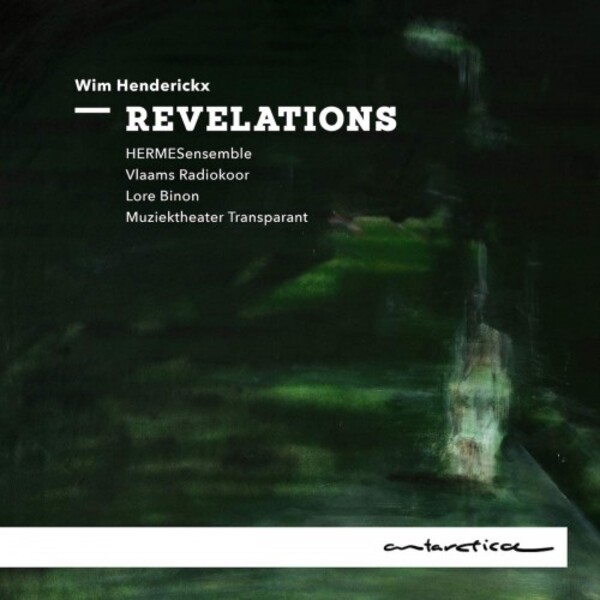 Revelations is the third collaboration between Wim Henderickx and HERMESensemble to be captured on CD. The composer and the musicians of the Antwerp-based collective for contemporary music have been engaged in a prolonged voyage of musical exploration ever since 2006.

Improvisation and experimentation, with Henderickx himself regularly standing in on percussion, have inspired and formed the basis of various new compositions.

Revelations was created in 2017 as the music for a multimedia musical theatre piece directed by Wouter Van Looy and the dramaturgist Veerle Fraeters and produced by Muziektheater Transparant. Wim Henderickx is the house composer of Transparant and in 2011-2012 produced Medea with them in association with HERMESensemble.

Nowadays the poetic work of this Persian sufi is among the most widely read in all Islam. Revelations is by no means an illustrative depiction but rather translates the visions of Hadewych and Rumi to modern utopias. What do those inner voices and images of a woman alone on the stage say to us now? And in service of what utopia?

The basic elements of the musical theatre work are made up of a Missa Brevis for solo soprano, five-part womens choir, instrumental trio and electronics. The mass is the result of a search for a harmonic merging of acoustic sounds with a carpet of electronic sounds developed with Jorrit Tamminga.

Henderickx retains only the titles and core notion of the Catholic ordinary - Kyrie, Gloria, Sanctus (no Benedictus), the Agnus Dei and an added Halleluja - and in his score significantly places them between quotation marks. In addition to the passages from the mass, quotations from Hadewych furnished the inspiration for each part of Revelations and it is these phrases that also hold the keys to a better appreciation of the work.