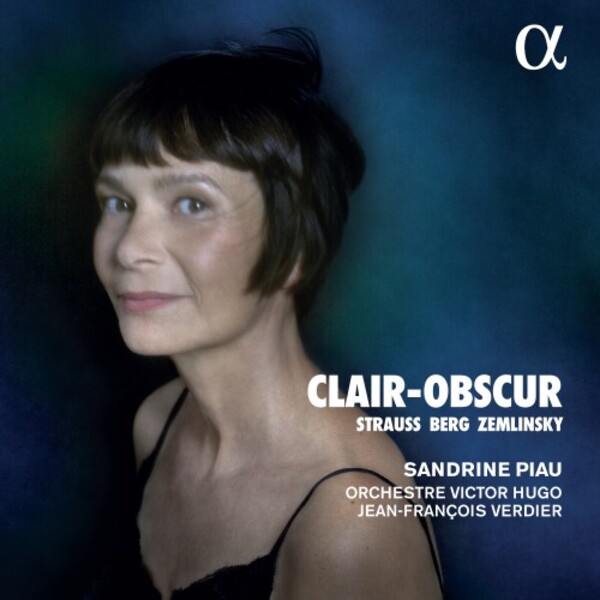 The dreamer! That double of our existence, that chiaroscuro of the thinking being, wrote Gaston Bachelard in 1961. The old is dying, the new cannot be born, and in that chiaroscuro, monsters appear, adds Antonio Gramsci. Sandrine Piau has chosen to use these two quotations as an epigraph to her new recording: My family and friends know about this obsession that never leaves me completely. The antagonism between light and darkness. The chiaroscuro, the space in between ...

This programme, recorded with the Orchestre Victor Hugo under its conductor Jean-François Verdier, who is also principal clarinettist of the Paris Opéra, travels between the chilly Rhenish forest of Waldgespräch, a ballad by Zemlinsky composed for soprano and small ensemble in 1895, the night of the first of Bergs Seven Early Songs (1905-08), and the sunlight of Richard Strausss Morgen, which are followed by the Four Last Songs, composed in 1948, the first two of which, Frühling and September (evoking spring and autumn respectively) are also, as Sandrine Piau concludes, the seasons of life.

For those who know her voice chiefly from her many achievements on the early music scene, Sandrine Piaus latest album will come as something of a surprise. Indeed, even those acquainted with her work in fin-de-siècle French art song may do a double take, as the acclaimed French soprano takes on the Austro-German world of the orchestral song as manifested by Richard Strauss, Alban Berg and Alexander Zemlinsky. Yet this music was, in Piaus own words, the first love of my student years, and this particular programme of works that inhabit that strange half-world between darkness and light (chiaroscuro or, in French, clair-obscur) so characteristic of Austro-German art at the turn of the last century is hugely rewarding. And it also offers abundant proof of the singers deep-rooted musical intelligence and lightly-worn technical finesse.

The booklet, graced by artwork ranging from Klimt and Seurat via Egon Schiele to Picassos still disturbingly nightmarish Guernica, gives some idea of the range of emotions at play here: from childlike innocence and youthful love, via the terrors of the natural and human worlds, to the world-weariness of later years. The disc opens with a deftly atmospheric performance of Zemlinskys Waldgespräch (Dialogue in the Forest), effectively a scena for soprano, two horns, harp and strings composed in 1895. Joseph Eichendorffs poem inhabits a tradition that goes back to Goethes Erlkönig and beyond, and Zemlinskys setting sticks closely to Eichendorffs four-stanza structure, with the voice taking the parts of both the wandering protagonist and the mysterious woman who turns out to be the fateful Lorelei, luring men to their doom. With marvellously colourful support from the Orchestre Victor Hugo Franche-Comté under Jean-François Verdier, Piau delivers a gripping performance whose late-Romantic colouring serves as an ideal curtain-raiser. And solo violinist Mathilde Borsarello makes the first of many telling contributions to the album: her luminous tone, crystalline tone matches Piaus own in Strausss exquisite Morgen!, composed a year before the Zemlinsky and orchestrated in 1897, a radiantly moving performance of this treasured setting.

Even more intimate is the lovely Meinem Kinde of 1897 (orchestrated in 1900), with its chamber-like scoring and childlike innocence, whose harmonies nevertheless have a knowingly forward-looking gaze. Piaus voice is gentleness itself, but she then rises superbly to the challenges of Alban Bergs 1928 orchestration of his Seven Early Songs (composed in 1905-08), some of which look forward to the terrifying expressionist world of Wozzeck (Nacht, Schilflied and Traumgekrönt) even as others seem firmly rooted in the late-Romantic glow of Wagner and Strauss. With Verdier bringing out telling orchestral details while never obscuring the voice, this is a jewel of a performance, capped by a superb account of the vocally demanding Sommertage. Its unsurprising, after hearing this, to learn that Piau performed these songs at the opening recital of Hamburgs Elbphilharmonie concert in January 2017; she inhabits their text and music completely.

With the closing C minor chord of Sommertage comes what may be this discs masterstroke: a segue more or less straight into the opening of Fruhling, the first of Strausss Four Last Songs. Theres no mention of this elision in the accompanying booklet, but whoever decided on it is a genius: youll never hear either work, the Berg or the Strauss, quite the same again after this. And the Four Last Songs themselves (1948) are the discs absolute trump card: with flowing tempi, never getting bogged down in the harmonic or timbral treacle in a way that mars so many other performances, this is an account that rediscovers the surprising freshness of these supposedly autumnal works. Piaus voice is very much in the Della Casa tradition, with a lightness and sense of wonder that makes more Wagnerian accounts seem impossibly de trop. There are again some wonderful instrumental solos (Borsarellos violin in Beim Schlafengehen, Nicolas Marguets horn at the close of September), and the orchestral playing throughout matches Piau in its understated attentiveness and sparkling lightness. This is a performance for those who value honest musical intelligence over velvety superficiality, restoring ones faith in musics power to probe deep into the human psyche.

How to close after such a performance? With Strausss actual last song, Malven, composed a few months after the Four Last Songs, a marvellously tender, almost throwaway setting of a text by Betty Wehrli-Knobel which serves as something of a palette cleanser after  all that Hesse and Eichendorff. Performed in Wolfgang Rihms sympathetic orchestration, its the final cherry on the cake for a disc that brings countless new perspectives on these vocal masterpieces, and is surely one of Sandrine Piaus finest recordings yet.