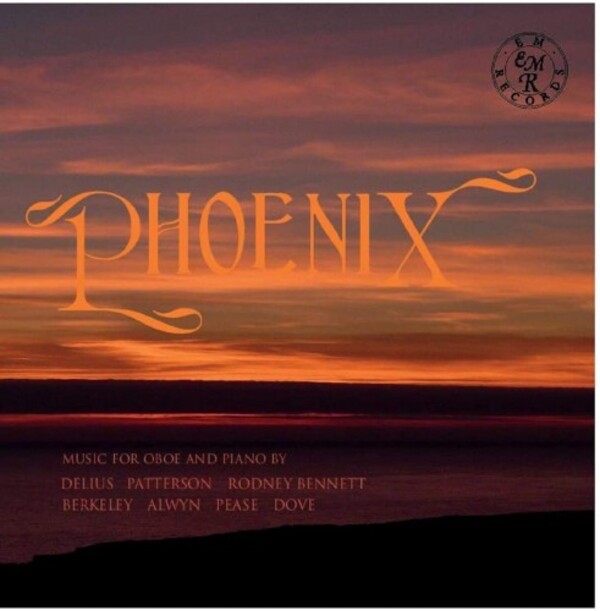 Phoenix: Music for Oboe and Piano

Lament for a Lovelorn Lenanshee

Lament for a Lovelorn Lenanshee

The disc is structured around Paul Pattersons Phoenix Sonata, of which the composer asked Hands to make the first recording. This disc aims to bring something new to the world of recorded oboe music, by highlighting too-often neglected works and introducing new works to the listener.

Named after the Phoenix Sonata by Paul Patterson, the album includes three world-premiere recordings, and four works by living composers. First on the disc is Four English Dances by Richard Rodney Bennett, a piece that embraces a new approach to traditional dance forms. The dances are characterised by faithful, expressive statements of familiar melodies by the oboe, supported by rich, chromatic piano accompaniments that betray the composers stature as a jazz pianist.

This is followed by William Alwyns Oboe Sonata, often overlooked in performances in preference of sonatas by Edmund Rubbra or York Bowen. Defying the usual sonata form, the work adopts a more sedate, contemplative style, making great demands of the oboist in terms of stamina and control.

The four subsequent tracks are by living composers, starting with the character piece Snake by Michael Berkeley, for the unusual instrumentation of solo cor anglais, and a dance-inspired work by Jonathan Dove, a composer usually known more for his vocal scores. Following this is a brand-new Nocturne for cor anglais and piano written by Jonathan Pease and dedicated to Nicola, lending a personal touch and celebration of the duo.

The piece depicts a journey along the Westbourne Canal, a route connecting the homes of the two musicians, and shows the true versatility of the cor anglais, an instrument whose range, agility and expressive range are often underestimated. Paul Pattersons piece, the title work of the disc, is a condensed version of his concerto for oboe and string orchestra, a powerful work inspired by the mythical bird of fire, and this is the premiere recording of the work in sonata form.

The CD ends with an arrangement by Robert Threlfall of music by Delius, taken from his Dance Rhapsody no.1. The arrangement requires the oboist to play both oboe and cor anglais, and again this is the first recording to be made of the arrangement.