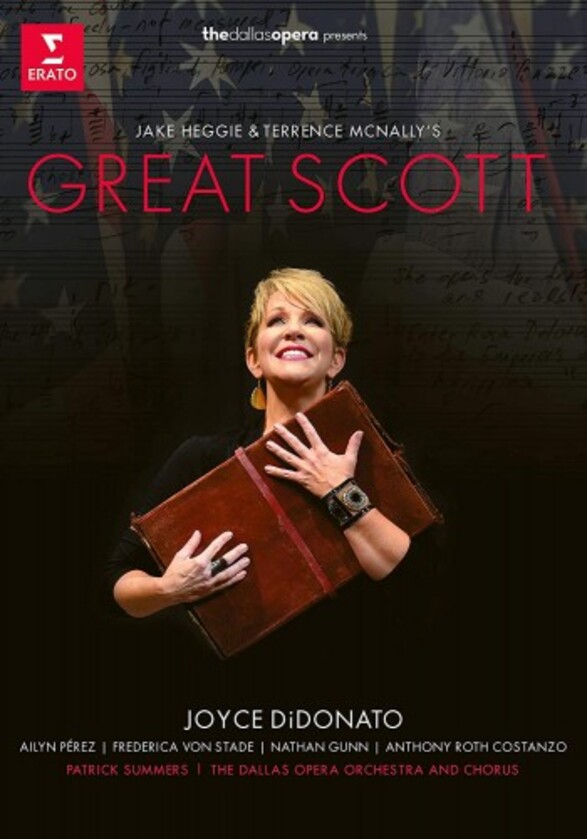 In Great Scott, the Kansas-born mezzo-soprano Joyce DiDonato, one of todays best-loved classical singers, creates a role conceived specifically with her in mind. The character she plays, Arden Scott, just happens to be an opera star, and she is the lynchpin of what Fred Plotkin of WQXR, the USAs leading classical music radio station, welcomed as a deeply moving and musically brilliant work that should enter the standard repertory just as Heggies two previous masterpieces  Dead Man Walking and Moby-Dick  already have.

Based on an original story by Terence McNally, Great Scott is set in a large American city that has a respected but struggling opera company and a thriving professional football team. International opera star Arden Scott has returned to her hometown to save American Opera, the company that launched her career, but the opening night performance of the long-lost opera she discovered (Rosa Dolorosa, Figlia di Pompei) falls on the same night as the home football teams first national championship (Go Grizzlies!). The fate of the company hangs in the balance as Arden is forced to consider the sacrifices she has made and discovers that true greatness is a matter of heart.

Jake Heggie, who has been described as US operas most successful composer, chose the celebrated playwright Terence McNally as his librettist for Great Scott. The two previously collaborated on the gripping Dead Man Walking, which has become something of a modern classic since its premiere in 2000. Joyce DiDonato first performed its central role, Sister Helen Prejean, at New York City Opera in 2002 and in concert stagings in London and Madrid in January/February 2018, coinciding with the album release of Great Scott. It was conducted by Patrick Summers and directed by Jack OBrien with sets and costumes by Bob Crowley, lighting by Brian MacDevitt and projections by Elaine J. McCarthy.