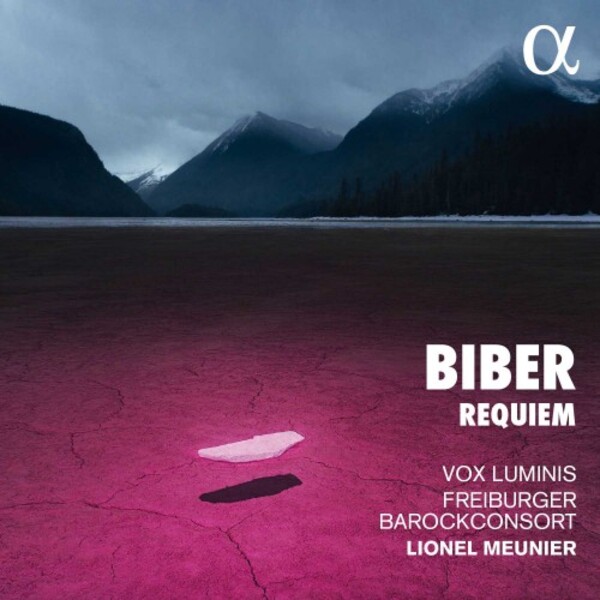 Sonata a 6 in A minor

Sonata a 6 in A minor

The winner of numerous prestigious prizes, including several Gramophone Awards, the vocal ensemble Vox Luminis, founded by Lionel Meunier in 2004, is now regarded as a benchmark in the interpretation of the great works of German Baroque music. Its unfailingly faithful and lively approach to such masters as Bach, Buxtehude and Scheidt has made the groups reputation, but this new recording features a major work by Heinrich Biber, a composer hitherto absent from its discography: his Requiem in F minor for 14 voices, composed around 1692. The programme is completed by two sacred works by Christoph Bernhard (Herr, nun lässest du deinen Diener in Friede fahren and Tribularer si nescirem misericordias tuas), two pieces by Johann Joseph Fux, and the Sonata a 6 in A minor of Johann Michael Nicolai. This recording marks the beginning of a collaboration between Vox Luminis and another internationally renowned ensemble, the Freiburger Barockorchester, heard here in its Consort formation.

On their latest release for Alpha, the Belgian early music ensemble Vox Luminis tackle one of the great choral works of the Austrian Baroque. Heinrich Bibers F minor Requiem may not be as well-known as either his virtuosic Mystery Sonatas for violin and continuo or his spectacularly large-scale Missa Salisburgensis (both composed during his years in the service of the Archbishop of Salzburg), yet the understated variety of its music penetrates to the heart of matters concerning the passing nature of human life, as well as questions of faith and grief, that for many put it on a par with later works by Mozart and Brahms. Its scoring, for five-part voices (soloists and ripienists) plus strings, sackbuts and continuo, lends it a quite distinctive atmosphere, essentially inward-looking but still capable of moments of drama in the more vividly illustrative passages of the Latin text. Also unmistakable is the essentially collegial nature of Bibers music, something to which Vox Luminis under the direction of Lionel Meunier, with their shared approach to solos, is ideally suited. Here they team up with the instrumentalists of the Freiburger BarockConsort to provide a surprisingly varied programme.

Most recordings of Bibers Requiem (and there have now been several since the pioneering 1960s account from the Vienna Boys Choir and Concentus Musicus Wien) couple it with other works by Biber himself and such closely connected contemporaries as Johann Heinrich Schmelzer. Vox Luminis and their colleagues, however, go for rather more unusual couplings, all from broadly the same period, but otherwise unconnected with Biber: a sonata and motet by the Vienna-based Johann Joseph Fux (still best-known for his instructional treatise on counterpoint, Gradus as Parnassum), a sonata by the Stuttgart-based Johann Michael Nicolai, and two motets (one German-texted, the other in Latin) by the north-German Christoph Bernhard. Together, they provide a fascinating overview of musical activity in the German-speaking lands of the late 17th and early 18th centuries.

The programme opens with Bernhards multi-section motet Herr, nun lässest du deinen Diener, a reflective expansion of the biblical Song of Simeon (familiar in Latin as the Nunc dimittis), with a probing, exploratory-sounding instrumental introduction, its scoring not dissimilar to Bibers Requiem. The penitential Tribularer si nescirem, also by Bernhard, is more compact, with passages of highly expressive writing in the madrigalian style. Nicolais Sonata in A minor, richly scored for string ensemble of 2 violins, 3 violas and violone, reflects his reputation as a composer of instrumental music, with a particularly engaging, gigue-like penultimate section before the slow final bars. All these works are welcome additions to the discography.

For most listeners, however, the main attraction of this disc will be the Biber, and Meunier and his colleagues do not disappoint. Other recordings may opt for greater contrasts and more extremes of tempo  this performance, however, is notable for its careful pacing and fundamentally meditative qualities. Meunier himself is a bass, and it is the way in which the lower voices not only support but also bathe the sound of the ensemble as a whole that characterises their performances in general, and this account of the Requiem in particular. There is already enough drama in Bibers music for the Dies irae that it doesnt require underlining in every performance, and the largely measured tempi here allow the musicians to savour the depth of the vocal and instrumental sonorities in a way you wont hear on many other recordings. The Lacrimosa section and the concluding Lux aeterna are memorably affecting while never tipping over into anachronistic romanticism, and the faster-paced passages of the Offertorium are clearly delineated. This is very much a performance to be experienced as a whole, however, rather than for this or that moment, and as such it is powerfully convincing on its own terms.

Two works by Fux close the disc: a G minor Sonata with an archaic flavour that reflects his mastery of counterpoint as well as a surprising level of inventiveness, and a Latin motet that combines old and newer stylistic features, with an uplifting final Alleluja that really sets the seal on another fine release from Vox Luminis and their colleagues. Singing and playing throughout is beautifully judged, lower voices rich, upper parts ringingly clear, and all perfectly captured in the Church of St John the Baptist, Beaufays, by producer Aline Blondiau.