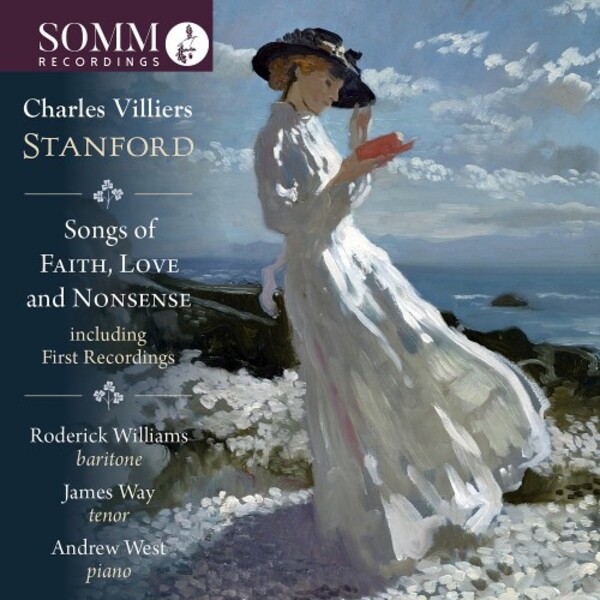 SOMM Recordings announces a major new recording of songs by Charles Villiers Stanford including the first complete recording of Songs of Faith and 12 first recordings of other distinctively vital songs.

Songs of Love, Faith and Nonsense continues SOMMs widely acclaimed commitment to Stanfords music with baritone Roderick Williams, tenor James Way (making his SOMM debut) and pianist Andrew West throwing revealing new light on his gift for word setting and the variety of his responses to matters of emotional ardour, spiritual fervency and the sublime nonsense poems of Edward Lear.

Setting poems by Tennyson and Walt Whitman, Songs of Faith demonstrates Stanfords ability to give unique expression to the profound and the arcane with music of dramatic force and harmonic ingenuity. Three songs by Robert Bridges (librettist for Stanfords oratorio Eden) and four songs from the opera Shamus OBrien tap into Stanfords Irish roots to colourful and evocative effect.

The delightful Nonsense Rhymes taken from Edward Lears inimitably playful, poignant and pointed limericks show a different side to Stanford, a highly articulate, dry humour like many literary Irishmen of his era, as Jeremy Dibble says in his authoritative booklet notes.

SOMMs previous Stanford recordings include the recently released String Quintets (SOMMCD0623) and the complete, three-volume String Quartets (SOMMCD0160, 0185, 0607) with the Dante Quartet praised by Gramophone for their ardent, alert and thoroughly lived-in performances, and Partsongs with the Birmingham Conservatoire Chamber Choir and Paul Spicer (SOMMCD0128) which Limelight described as excellent beautifully sung.

SOMMs world premiere recording of The Travelling Companion (SOMMCD2742) was hailed a landmark by Gramophone.

Although he nurtured a whole generation of British composers, from Coleridge-Taylor, Vaughan Williams and Holst to Bridge, Bliss and Howells, Charles Villiers Stanfords own music  with the notable exception of his church music  had fallen out of fashion by the time of his death in 1924, eclipsed by that of Elgar and, increasingly, his former students. In recent years, however, his output has enjoyed a conspicuous revival, from the stirringly patriotic Songs of the Sea to the symphonies and chamber music. Recordings have played a major part in this revival, initially from the Hyperion, Chandos and Naxos labels and, latterly, from Somm Recordings, whose series of the string quartets have been particularly popular with collectors. Now they add to that success with a welcome disc devoted to Stanfords secular songs, covering a good decade-and-a-half of productivity from 1891 to 1907.

Any recording that features baritone Roderick Williams deserves serious attention, and here he joins forces with tenor James Way and pianist Adam West for a sensitive and spirited survey of songs of Faith, Love and Nonsense. Like many of his Irish compatriots, Stanford had a keen feeling for words and this, combined with a sure sense of musicality honed by his studies in Leipzig and a lifelong enthusiasm for the music of Mendelssohn, Schumann and Brahms, ensures that each of the small cycles presented here has much to offer both performers and listeners.

Williams opens the disc with the Songs of Faith (1907), comprising six songs, the first set of three to texts by Tennyson, the second set by Walt Whitman. The first song, Strong son of God, outlines an ambitious canvas with its dramatic opening and inexorable harmonic progressions, while God and the universe and Faith (both texts taken from The Death of Oenone) plumb greater depths, the introspective former in particular benefiting from Williamss unfailing responsiveness to the lyrics, while Wests dedicated accompaniment comes into its own in the sparkling music at the words comes a gleam of what is higher. The Whitman settings are, if anything, even finer, with Stanford inspired to uncharacteristically adventurous chromatic harmonies in To the Soul and Tears. In the final song the metaphor of a sea voyage clearly appealed to Stanfords penchant for maritime evocation.

In the Three Songs of Robert Bridges (1891), love is the theme, and there is a distinctive Irish folk flavour to the opening number, while I praise the tender flower and Say, o say! saith the music are performed with exquisite beauty by Williams and West, revealing Stanford as a song composer of enormous nuance in the high Romantic vein.

During his lifetime, Stanford scored several successes as a composer of operas, and one of the most enduring was the romantic comedy Shamus OBrien, the story of a hero pursued by the British authorities in the wake of the 1798 Irish Rebellion. In the four songs excerpted from the opera, James Way takes the part of Captain Trevor, a British soldier in love with Shamuss sister-in-law Kitty, a classic lyric tenor role; he then shares the role of the antagonist, the treacherous Mike Murphy, with Williams, singing the mercenary Glengall while Williams takes the briskly nostalgic Ochone! When I used to be young. The set closes with the heros monologue I love my ould Ireland, sung as he is brought to the gallows, and delivered by Williams with suitable defiance. Its all enough to suggest that the opera itself would be well worth a revival and even a complete recording.

James Way has one cycle to himself, The Triumph of Love (1903), which sets five sonnets by Stanfords cousin Edmond Holmes, wordily effusive affairs which nevertheless benefit from Stanfords sure-footed settings, the odd-numbered items serving as robust pillars to the more gently mellifluous Like as the thrush and I think that we are children, in which Ways light-toned voice is at its finest. The whole cycle, however, he invests with a welcome passion, redeeming Holmess verbosity with the aid of Stanfords gracious vocal lines and nicely-judged accompaniments.

From the accounts of those who knew him best, its clear that Stanford had a dry and impish sense of humour, and this is abundantly evident in his settings of 13 of Edward Lears Nonsense Rhymes, discovered by publishers Stanford & Bell in bomb-damaged archives and belatedly published in 1960. These are light-hearted settings which were performed by Stanford himself at the social gatherings he hosted in Kensington for friends and students. They overflow with knowing musical quotations, usually apposite to Lears texts, sometimes affectionate (Mendelssohn, Beethoven, Handel and Brahms), at others pointedly satirical (Richard Strauss and Wagner being the main targets). All three performers clearly enjoy themselves, and listeners will have fun spotting the various musical works that are referenced. Our favourite? The Mendelssohn and Beethoven Violin Concertos entwined in The Compleat Virtuoso (There was an Old Man of the Isles).

A fine recording from the Wyastone Concert Hall, and expert notes from Stanford authority Jeremy Dibble, ensure that this all adds up to a disc to savour, and not just for fans of the composer. The performances are committed and communicative in equal measure, and with many first recordings this is a significant addition to the catalogue.

Elgar - The Fringes of the Fleet