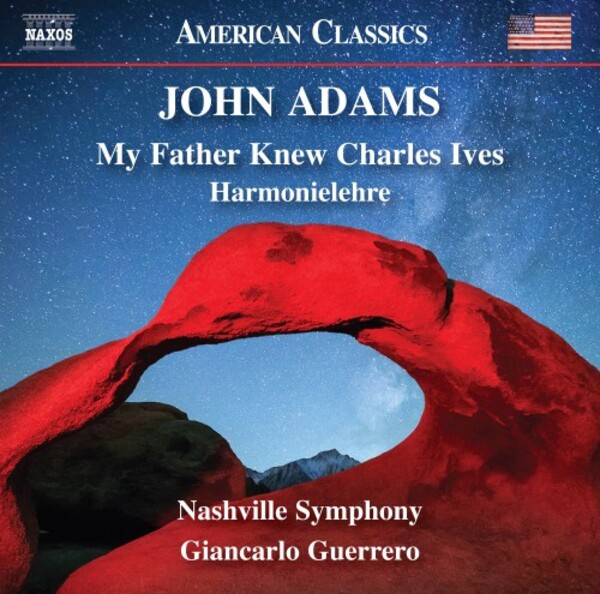 Pulitzer and Erasmus Prize-winning composer John Adams occupies a unique position in the world of American music. His works stand out among contemporary classical compositions for their depth of expression, brilliance of sound, and the profoundly humanist nature of their themes. Adams describes My Father Knew Charles Ives as an homage and encomium to a composer whose influence on me has been huge. Harmonielehre was a deliberate move by Adams to expand his musical language beyond Minimalism, keeping its energetic pulse but embracing the rich tonal resources of the past to create a work that has accrued an aura of timelessness.

John Adams is one of the most widely performed and recorded composers today. Harmonielehre from 1981 is of course well known on records, but My Father Knew Charles Ives has only previously been available on record once  so this spectacular new Nashville recording will be a welcome and inevitably popular addition to the Adams discography.

Previous Naxos releases of music by John Adams have included Shaker Loops (8559031), of which The Penguin Guide stated that you cannot better this splendidly played anthology from Marin Alsop and the Bournemouth Symphony Orchestra, vividly recorded within an ideal acoustic. Also available is Adamss iconic opera Nixon in China (866902224), praised as a new standard in the genre (Interchanging Idioms).

Champions of new American music, Giancarlo Guerrero and the Nashville Symphony had premiered numerous works, and received 13 Grammy Awards including two for Best Orchestral Performance. Among their award-winning recordings include works by Michael Daugherty (Metropolis Symphony on 8559635; Tales of Hemingway on 8559798), Stephen Paulus (Three Places of Enlightenment on 8559740), and Jennifer Higdon (All Things Majestic and Viola Concerto on 8559823).