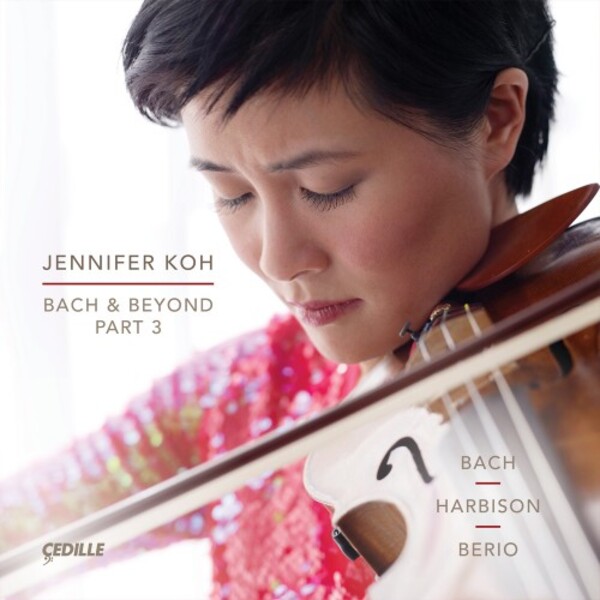 American violinist Jennifer Kohs Bach & Beyond Part 3 concludes her critically acclaimed series of recordings based on her groundbreaking, multi-season recital series of the same name that The New York Times has called indispensable.

On this series-finale album, Bachs florid and fanciful Sonata no.2 in A minor and Sonata no.3 in C major, celebrated for its colossal Fuga movement, frame Luciano Berios expressive, chaconne-like Sequenza VIII and Pulitzer Prize winner John Harbisons alluring For Violin Alone, a dance suite inspired by Bachs partitas, written for Koh (a world-premiere recording).

Torontos The WholeNote said of Kohs previous installment, Bach & Beyond Part 2, Koh, as always, is superb, her intelligence and interpretation always matching her outstanding technique, while the Newark Star-Ledger cited her distinctive voice over a range of styles in its praise of Bach & Beyond Part 1, which launched the series.

Bach & Beyond Part 3 is Kohs 14th Cedille Records album. Her Cedille discography includes last seasons Limitless, on which she performs nine contemporary duets with the composers themselves. The Chicago Tribune named it among the Best Classical Albums of 2019, praising it as a testament to Kohs adventurousness and the creativity of all involved. The Strad called it an enterprising collection of breathtaking new music. BBC Music Magazines 5-star review described the violinists Saariaho X Koh, devoted to music of Kaija Saariaho, a delicate yet visceral recording. Kohs String Poetic, featuring the world-premiere recording of Jennifer Higdons title track, earned a Grammy nomination.