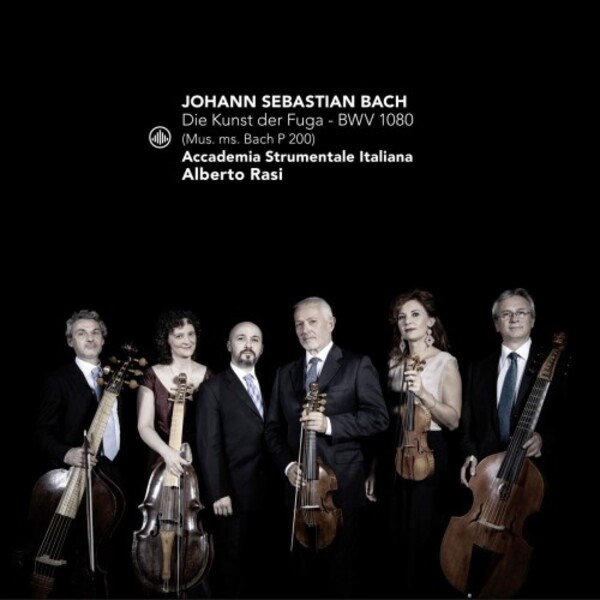 A brand new account of Bachs masterwork based on the most recent musicological research, this recording presents us with a radically innovative approach. The Art of Fugue is both Johann Sebastian Bachs opus summum and last complete work, presumably undertaken between 1740 and 1742.

According to the frontispiece, the works original title actually read Die Kunst der Fuga, notably featuring the Latin (or Italian) word fuga rather than German Fuge - as found, instead, in the two printed editions of 1751 and 1752. Die Kunst der Fuga (KdF hereafter), in the form and the order presented in the Berlin autograph, has all the appearance of a finished work featuring 14 fugues and canons, all based upon a single original theme, serving as the works foundation and with the individual pieces progressing in an increasing order of difficulty and contrapuntal perfection.

This brief study sets out to attempt a switch in perspective, shifting from the point of view of the first printed edition - through which the KdF has traditionally been examined by the vast majority of scholars - to that of the Berlin autograph. Despite having already been studied and collated with the 1751 and 1752 editions, the autograph has always been viewed by the dominant ideology as incomplete; little more than a preparatory stage for its printed counterparts. Only in recent times have scholars (amongst whom Christoph Wolff) started to note that the KdF as found in the autograph manuscript at the time of its completion might well stand comparison with the alleged final version of the printed editions, and thus may be elevated to the full dignity of an Alte Fassung.

And this study would argue that the Berlin autograph contains, in fact, the latest and closest-to-final version of the KdF, whilst the first printed edition is entirely the result of the conjoint efforts of Bachs children and students as there is no proof that Bach was ever involved in preparatory works concerning any other of its pieces. Furthermore, the order displayed in the Berlin autograph appears decidedly more logical and artistic than that of the first printed edition - which, by comparison, appears less interesting (tending towards pedantic) and not without compilation errors.

Far from being a merely speculative or theoretical work, Die Kunst der Fuga is a work for manualiter keyboard. But true to the spirit of an era of musica prattica, performing polyphonic keyboard repertoire with instrumental ensembles aligns with a consolidated tradition that finds it roots in an amply documented practice dating all the way back to the 16th century. The viol consort had been the instrument par excellence since the 16th century for its ability to render transparent even the most complex of polyphonies, and it had only just left the scene to the modern virtuoso baroque orchestra. And our choice of combining the violin (a da braccio instrument) with the members of the da gamba family falls perfectly within the German musical tradition.

With a spacious recording and a refined, well-considered performance this is an Art of Fugue with a great deal to offer. - MusicWeb International

These players offer a refreshingly varied instrumental and textural palette...Most affecting, perhaps, are the dance-like, so-called mirror fugues, played by organ and violin, which leap off the page to make an indelible mark upon our sensibilities. Accademia Strumentale Italiana illuminate every component of Bachs visionary masterpiece. - Classical Music

... a very warm, natural sound, great transparency and thrilling emotion that never gives the impression of an academic exercise in style... You seldom hear the Art of Fugue so lively and undisguise. - Toccata (Germany) Disc of the Month

The recording is just as transparent as the interplay. All in all, this is an absolute asset! - Opus Klassiek (Netherlands)

This is a beautiful CD that you should not miss! - Stretto (Belgium)

What excitement moves from this re-enchated parchment! - Joker by Crescendo (Luxembourg)