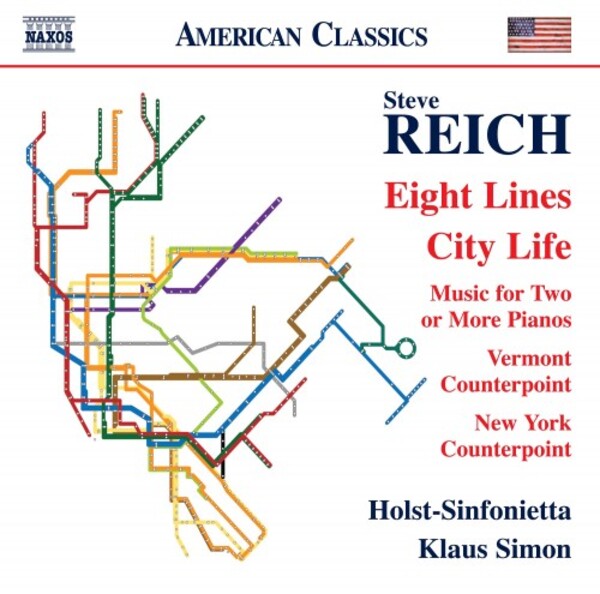 Steve Reich is universally acknowledged as one of the foremost exponents of minimalism, arguably the most significant stylistic trend in late 20th-century music. This chronological survey shows how Reichs innate curiosity has taken his work far beyond such musical boundaries. One of the first fruits of Reichs creative quest is Music for Two or More Pianos, in which the influence of Morton Feldman and jazz pianist Bill Evans can be heard. The rhythmic and flamboyant Eight Lines comes from the true heyday of minimalism, while Vermont and New York Counterpoint both explore webs of phased patterns created by multi-tracked instruments. City Life is a dramatic set of impressions of New York, vividly weaving sampled speech and street sounds into a work with symphonic depth of range and expression.

Steve Reichs music has been hugely popular on records and in concert halls since minimal music emerged in the 1970s and 80s as one of the most potent and recognisable stylistic developments of 20th-century music. Most of the works on this album have been recorded before, but these versions by the excellent musicians of the Holst-Sinfonietta are second to none and better than most. We also have something of a coup in the world premiere recording of Reichs early Music for Two or More Pianos, which predates the iconic Piano Phase by three years and reveals another aspect of his formative experimentations into tonality in music, something that was very much against the avant-garde stream at the time.

The Holst-Sinfonietta is a chamber ensemble founded in 1996 by Klaus Simon and based in Freiburg, Germany. A priority for the orchestra has always been the desire to offer unusual and challenging concert programmes of high-quality music, irrespective of stylistic barriers. Their concerts with works by Steve Reich and Terry Riley in 2010 were a big success, the Badische Zeitung commenting that the perfectly led ensemble penetrates deeply into the layers of the music and thereby avoids any monotony one might expect.

Their recordings for Naxos include John Adamss I was Looking at the Ceiling and Then I Saw the Sky (866900304) in a performance that really cooks for Classic FM, and Joseph Schwantners Sparrows / Music of Amber (8559206) given 5 stars by BBC Music Magazine, with a declaration that this particular disc happens to be so board-sweepingly excellent that one almost feels guilty about buying it at its designated price point.

Freiburg-based chamber ensemble the Holst-Sinfonietta takes its name from the English composer Gustav Holst. It was founded in 1996 by its conductor Klaus Simon with players from South Germany, France and Switzerland. An open-minded approach to repertoire has brought performances of works by Mahler, Holst, Martinů, Berg, Britten, Steve Reich, Philip Glass, John Adams, Joseph Schwantner, HK Gruber and Luke Bedford, among others, with many works being given their German  premieres. Since it began, the ensemble has collaborated with the Opera Factory Freiburg (formerly the Young Opera Company), appearing on a series of broadcasts and recordings since 1999, including Viviers opera Kopernikus, which won a German Record Critics Award in 2016 and an International Classical Music Award in the opera category in 2017.