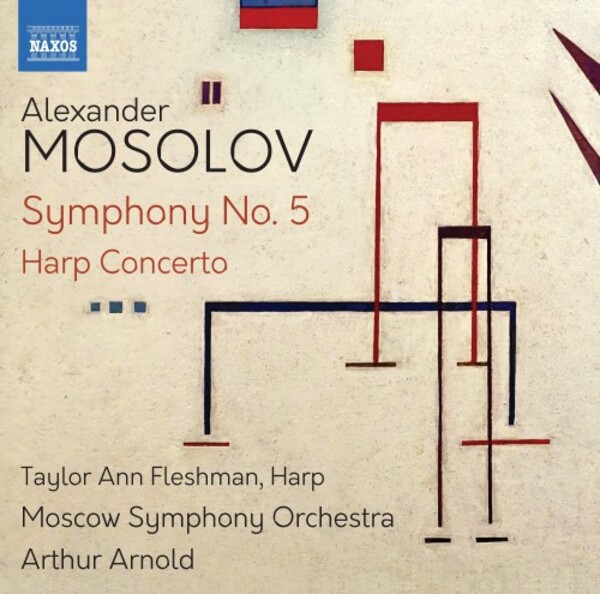 Alexander Mosolov was one of the foremost composers of the Russian avant-garde during the 1920s. His music was considered a testament to the revolutionary spirit of his time, but the legacy of his fame from that period now rests solely on The Iron Foundry. Soviet-era politics brought persecution and imprisonment, and these two recently rediscovered works were both composed after his rehabilitation. The Harp Concerto  a piece worthy of a place in the mainstream repertoire  is Mosolovs response to the concerto by his teacher Glière, and is heard here in its first complete performance. Coupled with the first recording of his final colourful Fifth Symphony, these are fascinating additions to the corpus of neglected Soviet-era works.

For many decades Alexander Mosolovs reputation rested entirely on a single orchestral work from 1926, Zavod or The Iron Foundry (Capriccio C5241), a remarkable descriptive orchestral episode that still has novelty value today. Other works from Mosolovs post Gulag period have now started to emerge and become appreciated such as the Symphony in E major from 1944. A world premiere recording of two major orchestral works by a renowned but severely neglected Russian composer will inevitably generate a wave of interest throughout the music world.

Young harpist Taylor Ann Fleshman has among numerous awards been First Prize winner of the 2018 Pacific Region International Summer Music Academys concerto competition. After performing and recording the Mosolov Harp Concerto in Moscow for Naxos in January 2019 she was invited to the PRISMA Festival to perform the work as a guest soloist.

Dutch-born conductor Arthur Arnold leads captivating performances with prominent symphony orchestras around the world, and he has been music director of the Moscow Symphony Orchestra since 2012. Founded in 1989, the Moscow Symphony is now one of Russias leading orchestras. Amongst its numerous highly successful Naxos recordings can be found film music by Sir Malcolm Arnold (8573366) described as marvellous performances by ClassicsToday.com, and 17 volumes of orchestral works by Alexander Glazunov.