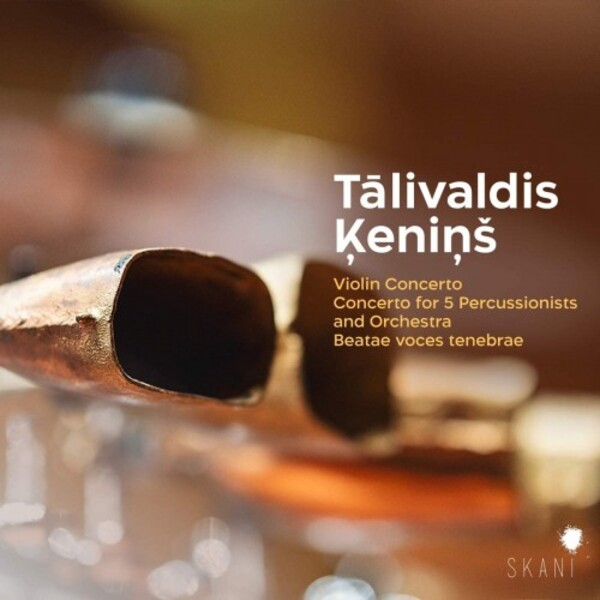 Tālivaldis Ķeniņ is one of the most notable Latvian composers - a neo-romantic, harsh, full of life, a technical virtuoso. Born in Latvia and having studied in France, he lived in Canada for the remainder of his life.

His Violin Concerto, Beatae voces tenebrae and the Concerto for 5 Percussionists and Orchestra see their world premiere release in form of studio recordings with this SKANi release.

Ķeniņ is one of Canadas most performed composers. He was a long-time lecturer in the Faculty of Music at the University of Toronto and a full professor from 1973. He was active in the Canadian League of Composers, serving as its president for two years. He also participated in radio broadcasts and served as a jury member for countless competitions.

Ķeniņ contributions have been important from both the academic and practical aspect and have been recognised by the university leadership as well as the Government of Canada. Ķeniņ predominantly wrote instrumental music - eight symphonies, symphonic miniatures, more than ten instrumental concertos, an impressive number of compositions for chamber ensemble, piano and organ - but he also composed solo and choral music, three cantatas and an oratorio.

Most importantly, if Ķeniņ had remained in Latvia, he would possibly have become one of our many composers to professionally write music but never truly escape the comfortable yet anachronistic style of national romanticism. By having decided to study in Paris, he paved his way to becoming a highly professional composer on a global level.

Ķeniņ is stylistically related to many: Stravinsky, the New Vienna School, Messiaen, Neoclassicism. All of this can be heard in his music. He is one of the most eclectic of Latvian composers, but, if we compare his early work with that from the end of his career, his musical style became ever more vivid, unique and also recognisable in his latter period.

Ķeniņ trademark is diversity - touches of modernism, expressionism and also jazz permeate most of his compositions, yet each of them is autonomous and fairly precisely defined in its intent. The Concerto for 5 Percussionists is like a bright, attractive performance; the Concerto for Violin features a fully developed concertante principle yet also has a very powerful narrative; Beatae voces tenebrae sounds like a contemplative poem and confirms Ķeniņ loyalty to Bach, one of the grandest of geniuses.
- Andris Poga

excellent performances and the extra Beatae voces tenebrae is no mere filler  an unsettling monolith thats worth hearing alone, perhaps first. This disc is unmissable.  Andrew Mellor
The Strad