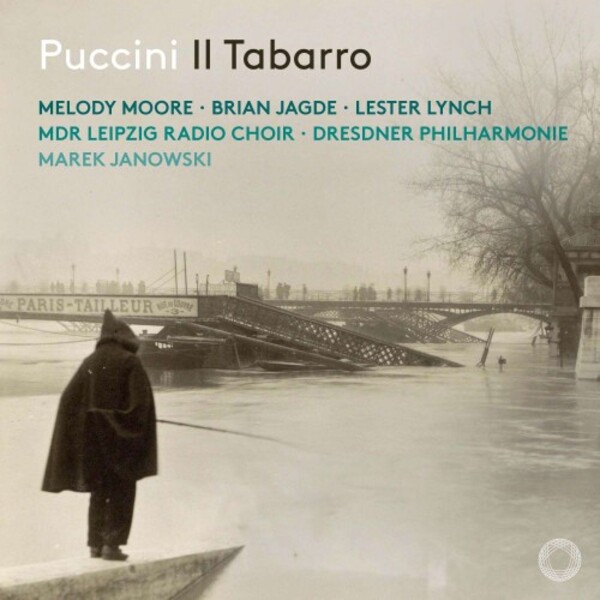 After their acclaimed Cavalleria rusticana recording, Marek Janowski and the Dresdner Philharmonie now present Puccinis Il Tabarro. Puccini composed this piece as the first panel of his Trittico (1918), a novel work combining three one-act operas, and also containing Suor Angelica and Gianni Schicchi. The explosive story about illicit love and revenge on the banks of the Seine recalls the verismo of Mascagnis Cavalleria. Beneath the verismo surface, however, Il Tabarro is a highly modern piece, full of impressionist harmonies, allusions to Stravinsky and dramatically significant self-borrowings. In this recording, Janowski and the orchestra particularly showcase the symphonic quality of Puccinis music. They are supported by an outstanding cast of soloists, including Melody Moore as Giorgetta, Brian Jagde as Luigi and Lester Lynch as Michele, as well as the MDR Leipzig Radio Choir.

Marek Janowski is one of the most celebrated conductors of our times, and enjoys a vast PENTATONE discography including a recent recording of Webers Der Freischütz (2019) with the MDR Leipzig Radio Choir. This is the second PENTATONE release of the Dresdner Philharmonie with Janowski, after Cavalleria rusticana (2020), which also featured the same three main soloists. Melody Moore and Lester Lynch both have participated in several PENTATONE recordings, including Verdis Otello (2017).

Il tabarro may not be Puccini's most popular opera. Even among the triptych of one-act works that make up Il trittico, the comic masterpiece Gianni Schicchi has proved the greatest hit, while the sentimental Suor Angelica was the composers own favourite of the three. Yet there are Puccinians who regard Il tabarro (The Cloak) as one of his greatest works, a concise but gripping piece of slice-of-life realism that unfolds a tale of disillusionment, passion and ultimately fatal jealousy. Of all Puccinis works, it is the one most steeped in the verismo genre that swept through Italian and French opera from the 1890s to the 1920s, itself a byproduct of the literary and dramatic Naturalist movement originating with Émile Zola. Usually set in a working- or lower middle-class milieu, such stories aimed to show the effect on normal people of their surroundings and circumstances, but they soon took on a sensationalist aspect that was all the more gripping for its often drab surroundings.

Though only some 50 minutes in length, Il tabarro packs a powerful punch, and it is not a complete surprise that Marek Janowski  best known for his fleet-footed, cleancut Wagner recordings  has chosen to add it to his Pentatone discography. (His previous recording for the label, with the same forces, was Mascagnis Cavalleria rusticana, regarded as the fons et origo of the verismo genre.) The same strengths that characterise Janowskis Wagner are evident here: he keeps proceedings on a tight rein, never overindulging in the big climaxes as some Puccini conductors tend to do, but putting his faith in the score and, with the Dresden Philharmonic of which he is principal conductor, bringing out a wealth of orchestral detail and subtlety which, in this most impressionistic of Puccinis scores, proves absolutely crucial. The louring atmosphere of the working Seine on which the action is set seeps throughout the opera, and the motions of its gentle but insistent waves are perfectly captured from the outset, complete with the sirens of distant tugs.

On the barge that forms the centre of the action, the barge-owner Michele and his young wife Giorgetta are in a marriage that has cooled following the death of their child. Baritone Lester Lynch as Michele sounds younger than some other performers in this role, but perhaps the age gap shouldnt be as marked as is often seen on stage. There are more characterful Micheles on disc, but Lynch has a quiet dignity about him that makes for a more sympathetic picture, as Puccini no doubt intended. It is too easy to think of Michele as the villain of the piece, when in fact he is its tragic hero, and this performance provides a useful corrective. As Giorgetta, soprano Melody Moore is as radiant and involved as she has been on several other Pentatone recordings, and vocally she is certainly the pick of the bunch here, encompassing a wide range of emotions, from emotional weariness, through joyful nostalgia to the heights of passion and the depths of horror.

The part of Giorgettas ill-fated lover, the ill-fated stevedore Luigi, is taken by tenor Brian Jagde, here sounding more nuanced than he was on Pentatones Cavalleria recording. His aria Hai ben ragione! meglio non pensare, a heartfelt complaint on the life of the downtrodden worker, could surely be more fervent, but he raises the emotional bar in his later scene alone with Giorgetta, where Janowski and the orchestra are marvellously supportive of the singers until the climactic outburst as Luigi declares Ill make you a ring with drops of blood!.

As so often, Janowski knows exactly when to highlight telling orchestral details: the bassoon figure that underlines Giorgettas Penso che hai fatto bene a trattenerlo and then insinuates itself into her heart-to-hearrt conversation with Michele as he opens his wounded soul to her; or the swirling harp as Giorgetta takes in the beauty of the September sunset. Theres a nice bustle of activity as La Frugola (the Ferret) goes through the contents of her sack of lost and discarded objets trouvés, sympathetically sung by mezzo Roxana Constantinescu; you can really feel her longing for a home in the countryside in this delightful vignette. Of the rest of the supporting cast, character tenor Simeon Esper puts in a nice turn as the boozy Tinca, drowning his sorrows in wine, while bass Martin-Jan Nijhof is a somewhat underplayed Talpa, La Frugolas faithful but chronically overworked husband. Tenor Khanyiso Gwenxane hits just the right tone (and notes!) as the neighbourhood song-seller, peddling a number from Puccinis own La bohème.

Ultimately, this is a performance that adds up to much more than the sum of its parts, thanks to a sure hand on the tiller, a good sense of forward momentum as well as emotional claustrophobia, splendid modern sound (with surround sound option for those who have it), brilliant but not fussy observation of detail, and a fundamental faith in the musicality of the score. As the tensions build inexorably, through Micheles increasingly ominous monologue to the grisly climax, this recording proves as gripping as many starrier, more opulent and luxuriant rivals, and is more likely to bear up to repeated listening. Once again, Janowskis quiet strengths as an opera conductor pay dividends in an Il tabarro that is sure to win this laudably compact opera many new admirers.