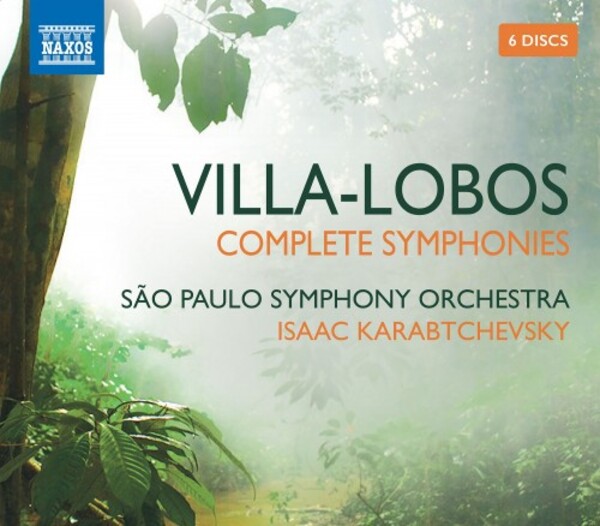 Heitor Villa-Lobos has been described as the single most significant creative figure in 20th-century Brazilian art music. The eleven symphonies  the enigmatic Symphony no.5 has never been found and may not even have been written  range from the two earliest, conceived in a broadly central Central European tradition, to the final Symphony no.12 which is notable for its explosive energy, harmonic richness and rhythmic vitality. Every aspect of Villa-Loboss remarkable inspiration is represented in these works, with Brazilian national rhythms and extremes of ambition in terms of scale and dramatic content, alongside neo-Classical transparency and lyrical charm. These critically acclaimed performances from São Paulo are both idiomatic and expertly played.

The combination of the São Paulo Symphony Orchestra (OSESP) with Brazilian conductor Isaac Karabtchevsky created an irresistible synergy with the music of their fellow countryman, and after the final volume of this complete Villa-Lobos symphonies edition appeared in 2017, these six discs have been the principal reference for these works.

Each release of this edition was received with almost universal acclaim. Symphonies nos. 3 and 4 (8573151) were considered serious and enjoyable works, and its great to see them getting the attention they deserve from the composers compatriots by ClassicsToday.com, and these new performances present both symphonies in the best possible light, the playing the most refined these works have had on disc for Gramophone.

The OSESPs involvement in the ongoing Music of Brazil series has produced two releases. The Villa-Lobos Concertos for Guitar and Harmonica (8574018) received a 10/10 score from ClassicsToday.com: Uniformly first-rate performances by members of the São Paulo Symphony making the whole disc a joy from start to finish. The succeeding release of Camargo Guarnieris Choros (8574197), also conducted by Karabtchevsky, was released in August 2020.