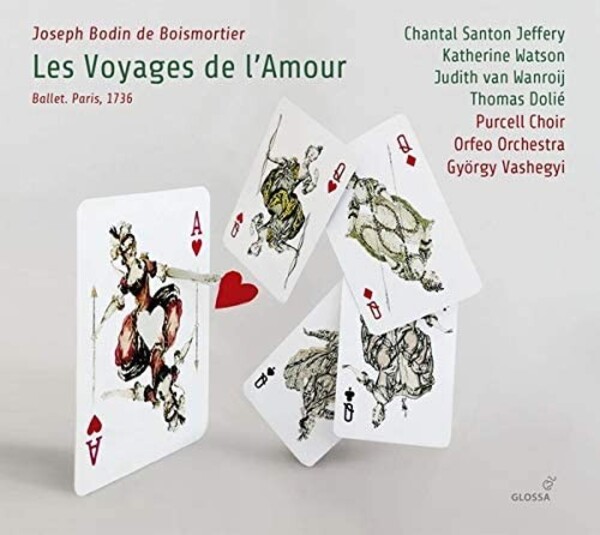 György Vashegyi, his Orfeo Orchestra and Purcell Choir offer up a recording of Boismortiers Les Voyages de lAmour of which this 1736 opéra-ballet has been in sore need, a score long and unjustly neglected.

For this latest dramatic extravaganza on Glossa, Chantal Santon Jeffery takes on the title role of lovesick Cupid, and the soprano is joined by two further widely experienced stars of the French Baroque opera revival in Katherine Watson (as the god of loves sidekick and factotum Zéphire) and Judith van Wanroij as the shepherdess Daphné, smartly resistant to the gods charms (until the end of the fourth act).

By 1736, Joseph Bodin de Boismortier had become well-known in Parisian musical circles for his entertaining instrumental and vocal music and in his booklet essay Benoît Dratwicki (of the Centre de Musique Baroque de Versailles) explains how this fashionable composer came to have his first production for the Paris Opéra cast into the shadows, how the roles for Cupid and Zéphire may have originally been written for two prominent dessus of the time but were replaced by male singers for the premiere and how this new recorded edition aims to provide a performance as the composer would have wanted it.
Katia Velletaz, Eléonore Pancrazi and Thomas Dolié also contribute to this lively entertainment, with this release also containing two differing versions of the second act about the arrow-firing god of loves travels through village, city and court in search of true love for himself.
Cast:
- LAmour: Chantal Santon Jeffery (soprano)
- Zéphire: Katherine Watson (soprano)
- Daphné: Judith van Wanroij (soprano)
- Un Habitant de Cythère, Hylas, Lucile, Dircé: Katia Velletaz (soprano)
- Béroé, La Prêtresse de lAmour, Julie: Eléonore Pancrazi (mezzo-soprano)
- Thersandre, Adherbal, Un Devin, Ovide: Thomas Dolié (baritone)