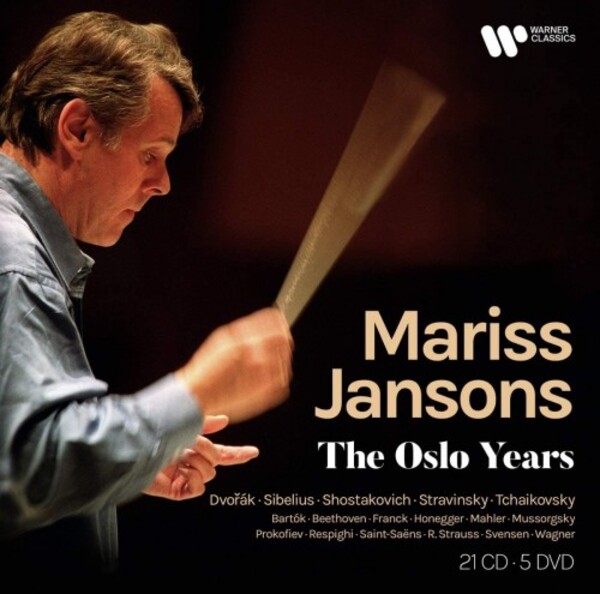 Symphony no.1 in D major 'Titan'

» Prelude (Dawn over the Moscow River)
Pictures at an Exhibition (orch. Ravel)

Symphony no.1 in D major 'Titan'

» Prelude (Dawn over the Moscow River)
Pictures at an Exhibition (orch. Ravel)

Over Mariss Jansons long tenure as Music Director of the Oslo Philharmonic, from 1979 to 2002, the Latvian-born conductor rose to global pre-eminence and the Norwegian orchestra cemented its international reputation. Trained in St Petersburg, and mentored by Yevgeny Mravinsky and Herbert von Karajan, Jansons took up his position in Oslo at the age of 36. The artistic leader is responsible for the quality of the orchestra, he said, He must think of the orchestra constantly. He praised the Oslo Philharmonic for its identity and unique sound and exceptionally strong work ethic and discipline  without a trace of arrogance, superficiality or routine thought. This 21-CD set comprises all the Warner Classics recordings they made together and reflects Jansons special mastery of music of the later Romantic era and the 20th century. Entirely new to the catalogue are 5 DVDs of concerts originally broadcast on Norwegian television and offering works by Sibelius, Mahler, Stravinsky, Tchaikovsky, Beethoven, Strauss and Franck.

1 December 2020 marks the first anniversary of the death, aged 76, of Mariss Jansons, who in 2013 was described by the Washington Post as the greatest living conductor. In a 2005 interview, Jansons expressed his philosophy: The goal is to enter what I call the cosmic world, where nothing but music exists, no technique, nothing else. You are thinking only about the imagination, content, atmosphere. Then the performance acquires a cosmic dimension. There is no, Is this the right note? or, Should I do more crescendo? This should be done in rehearsal. You come and make music at the highest level.

Jansons was Music Director of the Oslo Philharmonic from 1979 to 2002. Over that time he rose to become one of the worlds leading conductors and the orchestra achieved a new level of excellence and status, both as a national institution in Norway and as an ensemble of international distinction. Jansons was an exceptional orchestral trainer  demanding the highest standards of his players, but also a thoughtful and respectful man who aroused great affection and loyalty. Moreover, he was a vocal and determined public advocate for the Oslo Philharmonic, soliciting the ideological and financial support he felt it deserved from the Norwegian government and establishment.

Born in Latvia in 1943 and trained in St Petersburg (where he was mentored by Yevgeny Mravinsky), Jansons first conducted the Oslo Philharmonic in 1975, when he was 32. The Soviet authorities had just refused him permission to take up a post as Herbert von Karajans assistant. His accession to the post of Music Director of the Oslo Philharmonic coincided with the orchestras 60th anniversary. Jansons later wrote: From the very first moments of our meeting in 1975, I have known you as a professional ensemble through and through, with your own identity and unique sound, with an exceptionally strong work ethic and discipline, with an honest dedication, engagement and reverence towards your duties, without a trace of arrogance, superficiality or routine thought.

The Oslo Philharmonics style and sound reflected so very closely Mariss own personality, says Jansons former manager, Stephen Wright, a clarity and freshness of sound, with a further combination of refinement, range of colours, and passion in their playing  and above all a complete commitment to music-making  Attending their concerts was always a fresh and inspiring experience  similar to viewing great paintings that have been cleaned and beautifully restored.

Reviewing a Jansons/Oslo Philharmonic concert at Carnegie Hall in 1991, the New York Times wrote of lyrical phrasing, carefully balanced ensemble work, control of the long line, concentration and, most important, a sense of commitment to the act of music-making that makes one want to listen again.

The audio recordings in this collection were made between 1987 and 1997 for EMI Classics. They are the fruit of what was, at the time, the companys most extensive contract with an orchestra, which produced 21 releases. Some of these recordings have not been available for a number of years.

The collection also includes the world premiere releases, on 5 DVDs, of concerts broadcast on Norwegian state television (NRK) between 1985 and 2002.

CD 5 Mussorgksy
Pictures at an Exhibition, Night on the Bare Mountain