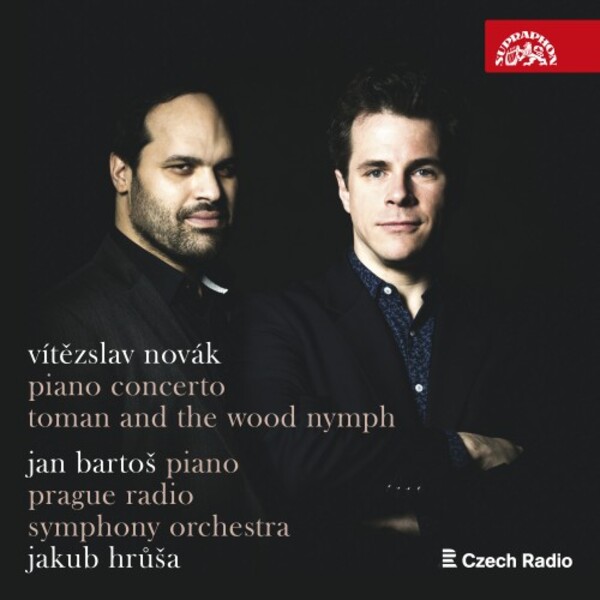 The greatest Czech composers  Dvořák, Smetana, Janáček, Suk, Martinů ... And anyone else? Yes, Vítězslav Novák! Who was he? A pupil of Dvořáks, later on one of the most distinguished music creators and teachers on the domestic scene. A Post-Romantic and the first of the generation of Modernists profoundly inspired by Moravian folk music.

Jakub Hrůa, a globally renowned contemporary conductor, invites us to rediscover Nováks music: We are obliged to perform it. His music is so profound and far-reaching that we simply cannot ignore it and let it gather dust in archives and remain buried in music history textbooks.

2020 is the 150th anniversary of Nováks birth. This is the first studio recording of the Piano Concerto, a remarkable early work by the 25-year-old Novák.

Think of Czech composers and the names Dvořák and Smetana inevitably come to mind. In the twentieth century, Janáček, Suk and Martinů each made their mark on the international repertoire to various extents and are now well-represented in the concert hall, opera house and record catalogues. But the late nineteenth and early twentieth centuries also saw a number of supporting characters who made distinctive contributions to the period but who nowadays barely get a mention: Zdeněk Fibich, J.B. Foerster and Otakar Ostrčil were all seen as possible airs to the Smetana tradition (and Fibichs music has recently featured on a series of discs on the Naxos label). Another important voice was that of Vítězslav Novák (18701949), who was closer to his teacher Dvořák and near contemporary Suk. After studying in Prague, he became acquainted with the folk cultures of Moravia and Slovakia, combining this influence with his own strand of turn-of-the-century introspective sensualism. In later life he cut a more conservative figure, and his operatic efforts met with little success, but his instrumental, orchestral and vocal works are all worth exploring, and for a while his music was more popular in Brno than that of local resident Janáček. So a new disc of his music is welcome, especially when it features persuasive performances from pianist Jan Barto and conductor Jakub Hrůa, both formidable champions of the music of their Czech compatriots.

It opens with an early work, the Piano Concerto in E minor of 1895, a student work which has not appeared on CD before. If the influences are a tad obvious  a heady Lisztian Romanticism in the first two movements (with shades of Rachmaninov in the central Andante), and an episodic finale more indebted to Dvořák, all running without a break  it nevertheless shows a fine absorption of compositional models and a deft command of keyboard writing. The monothematicism that underlies the music never stops it from being engaging, and Bartos playing is ardent and committed, with sterling support from the Prague Radio Symphony Orchestra under Hrůa and well-balanced sound. In fact, this work would not be out of place in Hyperions ongoing series of Romantic Piano Concertos, and anyone who has enjoyed that series will find much to admire here, with performances on a comparable level.

Next up is a cycle of four solo piano pieces entitled At Dusk, one of a series of piano works published at the suggestion of Brahms, no less, by his Berlin publisher Simrock. These stand in a tradition of Czech piano miniatures that stretch from Smetana to Janáček, Suk and Martinů, and although they date from just a year or so after the Piano Concerto, the intensely personal idiom results in music of greater individuality and expressive suggestiveness. There are echoes of Tristan as well as a more delicately-scored central section in the second-movement Alla ballata, which taps into a Central European tradition of legendary folk ballads. Lighter in mood but still of a decidedly Romantic hue are the two Serenades which conclude the set, their intimate atmosphere caught to perfection by Barto in playing of great sensitivity.

The highlight of the disc, however, is the ambitious symphonic poem Toman and the Wood Nymph, composed in 190607 after a Czech legend that also inspired composers including Fibich, Bergmann, Pihert, Kàan and Křička. A full decade after the Piano Concerto, Novák had by now fully embraced the eroticism of early-twentieth-century symbolism, partly prompted by an unhappy love affair of his own. The story of a rejected lover, Toman, who finds death in the embrace of a woodland fairy, no doubt appealed to the composer on many levels, and he responds with music that shows the clear influence of Richard Strauss, whose Salome he had recently seen in Prague. Written for large orchestral forces, and lasting 25 minutes, this is music that makes a huge impression, its first half dwelling on Tomans rejection before building into music of great passion and culminating in what Novák called a sonic orgy before the unhappy heros eventual demise. In an exceptionally interesting booklet note, Jakub Hrůa proposes Novák as the Czech Strauss to stand alongside the Czech Mahler of his colleague and rival Suk. During his own lifetime, however, Novák was noted locally for the influence of French impressionism on his mature music, and you can hear much of that evocative delicacy in the works magical opening pages, before lower brass and percussion lend proceedings a more visceral twist. There are even echoes of some of the more enchantingly-textured passages of Dvořáks operatic masterpiece Rusalka. Toman has been recorded several times before, notably by Czech conductor Frantiek Jílek, himself one of Nováks pupils. But Hrůas performance with the Prague Radio orchestra stands out from all others for its technical aplomb, full-throttle passion, expressive sensitivity and superb modern sound. Anyone with any sort of interest in Central European music at the turn of the century ought to hear this disc for the extra perspectives it affords on a fascinating figure of the period. In addition to Hrůas own conductors note, theres a detailed article on the biography and music by Vlasta Reitterová. Very warmly recommended!

... its brilliantly performed, Hrůa letting rip when needed. Id suggest waiting til the neighbours are out and turning the volume up: the closing bars are terrifying. A fascinating introduction to an unjustly neglected figure.
The Arts Desk

... its the work that ends the disc, the symphonic poem Toman and the Wood Nymph, that justifies Hrůas enthusiasm. Completed in 1907 and based on an early 19th-century ballad about a youth who is seduced by a wood nymph on St Johns Eve, it was the third of Nováks symphonic poems, and shows the mix of early modernist styles that he had grafted on to a form hed inherited from Dvořák. There are hints of French impressionism, but most of all theres the imprint of Richard Strauss, whose Salome Novák had just encountered. Its an effective piece, full of striking, pictorial invention, and Hrůa and the Prague Radio orchestra project it with every bit of the vividness it needs.  Andrew Clements
The Guardian 24 September 2020