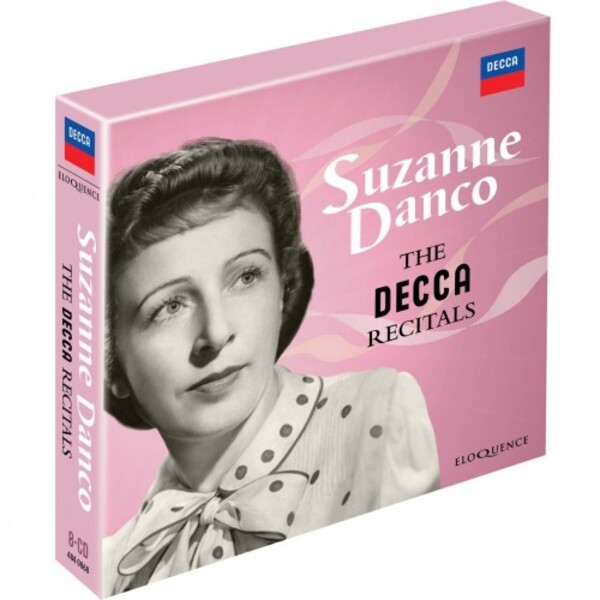 The complete Decca recital recordings compiled and newly remastered in tribute to a superlative Mozart soprano of the last century  released to commemorate the 20th anniversary of her passing (10 August 2000).
The Belgian-born Suzanne Danco (1911-2000) made her operatic debut in Genoa as Fiordiligi in 1941, and it seems appropriate that in July 1947 in Milan she began her Decca relationship with a selection of Mozart arias. Equally fittingly, her first operatic recording was Pelléas et Mélisande with Ernest Ansermet and LOrchestre de la Suisse Romande in April 1952. Ansermet always regarded Danco as his ideal Mélisande and, like Erich Kleiber, became a valued admirer of her artistry.
Dancos legacy on record is small but representative of her particular gifts in Mozart and French song, in which she was an almost unrivalled interpreter, leaving unforgettably refined readings of Debussys Fêtes galantes, Faurés La Bonne Chanson and Ravels Shéhérazade, among others. The Debussy and Fauré count among the highlights of a series of Decca albums made with her long-time recital partner, Guido Agosti, and compiled here complete for the first time.
There is much else in the box that is new to CD or long unavailable: a lovely 10-inch collection of lullabies, songs of Bellini and arie antiche; her refined touch applied to the German Lieder tradition, from Schubert and Schumann (including a rare soprano version of Dichterliebe) to Brahms, Wolf and Richard Strauss, all generously and intelligently chosen recitals; Danco herself regarded Schumanns Op.39 Liederkreis as one of her finest recordings. Wolfs Elfenlied from sessions in December 1950 was discovered among the tapes and is published here for the first time in any format. A delightful pendant to Dancos recording career is an album of 18th-century songs made for Philips Classics in October 1956 near her home in Florence, made with conductor Francesco Mollinari-Pradelli at the piano.
The collection closes with an anthology of highlights from her contributions to classic Decca recordings of oratorio and opera, including her Cherubino, Donna Anna, Eurydice, Mélisande and Concepción (LHeure espagnole).
Just the right balance between knowingness and innocence which lies at the heart of that equivocal role.  Daily Telegraph (Pelléas et Mélisande)
Madame Dancos fine voice and Ansermets magnificent accompaniment ... It would be quite difficult to imagine a combination that could do more justice to these extremely beautiful songs.  Tempo, winter 1948 (Shéhérazade)
Danco has the sensibility and the judgement required. Above all, she knows just the proper amount of weight and stylised emotion to infuse so that her renderings are just right in every sense.  Irish Monthly, June 1953 (Mozart & Strauss Lieder)
It might be argued that [La Bonne Chanson] is preferably a mans song-cycle, but with supreme artistry Mme. Danco wins the listener over to viewing the songs in a new light. Brighter colours emerge in this interpretation and, in particular, her control and phrasing make the performance outstanding.  Tempo, autumn 1953
Miss Danco is in excellent form.  High Fidelity, April 1954 (Strauss)
Mme. Danco manages the expressive cantilena of Bellinis songs ... very beautifully, and her voice is well recorded.  Musical Times, April 1955
Suzanne Danco makes an admirable Cherubino, ardent and youthful  a feat of characterization all the more astonishing when one has just listened to her Donna Anna.  Musical Times, February 1956
Miss Danco is well recorded. She chooses brisker tempi for all the songs, nearer the given metronome marks, and her spring-like voice is pretty throughout.  Music & Letters, October 1956 (Les Nuits dété)
This record comes close to perfection. Miss Danco brings to these superb Lieder a fine-spun voice, secure vocalism and exquisite musicianship.  High Fidelity, July 1956 (Liederkreis)
Miss Danco is a most accomplished artist whose performances are always intelligent and in perfect taste.  Music & Letters, October 1956 (Debussy, Chansons)
Suzanne Dancos devastating coolness is more effective than any amount of husky sexiness.  Opera, July 1987
(LHeure espagnole)
Contents:
CD 1: Opera Arias & Songs
Mozart · Charpentier · Verdi · Massenet · Bizet · Gluck · Purcell · Ravel · Bononcini · Caccini · Schubert
- Phyllis Spurr · Guido Agosti (piano)
- Jonel Perlea · Alberto Erede · Ernest Ansermet ·
CD 2: Schumann · Schubert
Lieder
- Guido Agosti (piano)
CD 3: Brahms · Wolf · Mozart · R Strauss
Lieder
- Guido Agosti (piano)
CD 4: Debussy · Fauré
Mélodies
- Guido Agosti (piano)
CD 5: Songs
Ravel · Bellini · Gounod · Schubert · Mendelssohn · Brahms · Fauré · Bach/Gounod
- Guido Agosti (piano)
- Ernest Ansermet
CD 6
Album de Musique
Berlioz - Les Nuits dété
- Francesco Molinari-Pradelli (piano)
- Thor Johnson
CD 7: J.S. Bach · Schütz
Cantatas & Sacred Songs
- Jeanne Demessieux (organ)
- Karl Münchinger
CD 8: Arias
Mozart · Gluck · Debussy · Ravel · Honegger · Fauré
- Erich Kleiber · Hans Rosbaud · Josef Krips · Ernest Ansermet