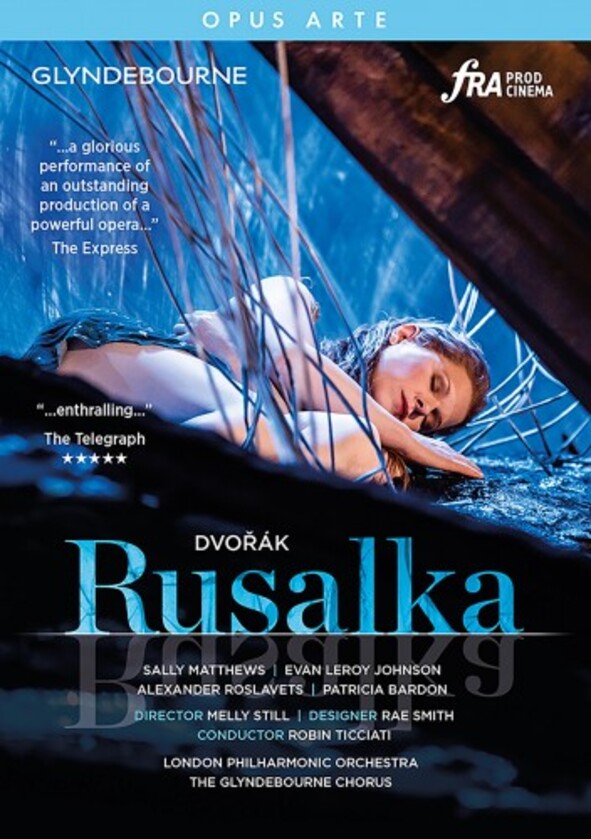 Melly Stills bewitching, theatrical and powerful production of this tale of nymphs, witches and heartbreak.
Praised by critics as magnificent, breathtakingly theatrical and full of zestful imagination, Melly Stills spine-tingling Rusalka is a Glyndebourne classic  a magical contemporary reimagining of a much-loved fairytale. Light and darkness, beauty and danger come together in this passionate tale of love against the odds.
At once evocative and unsettling, this production collides two contrasting worlds in Rae Smiths elegant designs made of brilliant stage-pictures. Rusalkas forest home is a dappled space of sunshine and shadows, full of strange woodland creatures, while the Princes court is a world of sleek modernity and sophistication  a world of man.
Two Glyndebourne favourites make their production debut here. Soprano Sally Matthews takes the title role of water-nymph Rusalka, with mezzo-soprano Patricia Bardon as her nemesis, the witch Jeibaba, conducted by Glyndebournes own music director Robin Ticciati.
 enthralling ...  The Telegraph ★★★★★
It is a glorious performance of an outstanding production of a powerful opera, and the final touch was provided by Robin Ticciati conducting the London Philharmonic Orchestra with great subtlety to bring out the best of Dvorak's music to show what a real treat this can be.  The Daily Express
Still draws strong characterisations from an excellent cast. Sally Matthews identifies with each phase of Rusalkas development and suffering, and her voice, with its distinctive raw-silk texture, is especially impressive in her climactic outburst in Act II.  The Stage
Melly Stills now ten year-old production rightly has no truck with the fay conventions of the romantic dream world, but, without denying the imagery, brings out the extreme menace, the coarseness and sometimes sheer nastiness that lurk just below the surface of what were pleased to call civilised life.  The Arts Desk
Extra features: Rusalka  Flying through water; Cast Gallery
Cast:
- Rusalka: Sally Matthews
- Vodník: Alexander Roslavets
- Jeibaba: Patricia Bardon
- Prince: Evan Leroy Johnson
- Foreign Princess: Zoya Tsererina
- First Nymph: Vuvu Mpofu
- Second Nymph: Anna Pennisi
- Third Nymph: Alyona Abramova
Director: Melly Still
Designer: Rae Smith
Lighting designer: Paule Constable
Movement director: Rick Nodine
Directed for the screen by François Roussillon
Duration: approx. 155 minutes
Audio: Dolby Digital 2.0 & DTS Digital Surround 5.1
Subtitles: EN, FR, DE, JP, KO