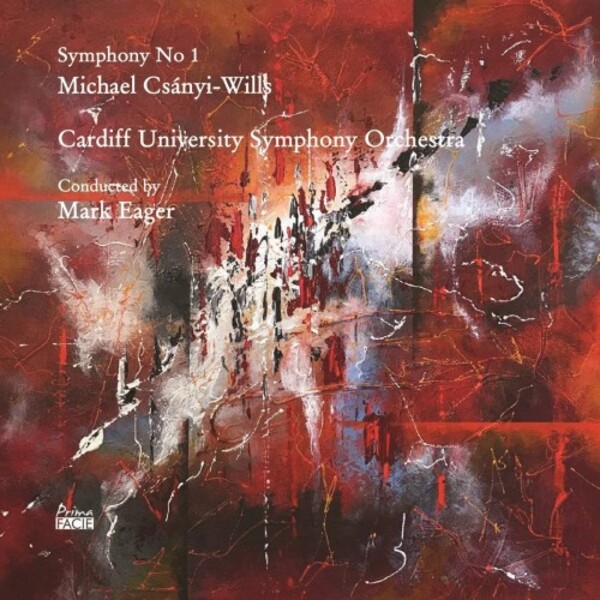 Prima Facie is pleased to announce the third release in a series of collaborations with Cardiff University Symphony Orchestra and conductor Mark Eager. The disc features the world premiere of Symphony no.1 by Michael Csányi-Wills, which Mark Eager commissioned in 2017.
Award-winning composer and pianist Michael Csányi-Wills has written works ranging from chamber music to choral and orchestral works to film scores and has been composer in residence with the Welsh Sinfonia since September 2013. His recent orchestral works have been widely performed throughout the UK and commissions have taken him around Europe, Australia and the USA.
This Symphony is a large-scale work and is a wonderful showcase for the talented Cardiff University Symphony Orchestra which has been an integral part of the Schools music making since its foundation in the late 1800s. The orchestras membership is largely drawn from students in the School of Music, although a significant number study in the Schools of Engineering, Modern Languages, Medicine, Physics, Law, Psychology and more, so this release seeks to further promote new composers and under the expert guidance of Mark Eager demonstrate that a world-class recording doesnt have to be made by a musical elite but as is shown here by amateur young musicians from all over the world.
A recent CD review in The Times said: The novelty that really made me excited this week was Debussys Chinese ballet score No-ja-li, another unfinished work, originally earmarked for a 1914 London stage revue, more recently restored to life in a brilliantly effective reconstruction by Robert Orledge. Its premiere performance by the excellent Cardiff University forces is the highlight of City of Light: New Discoveries.