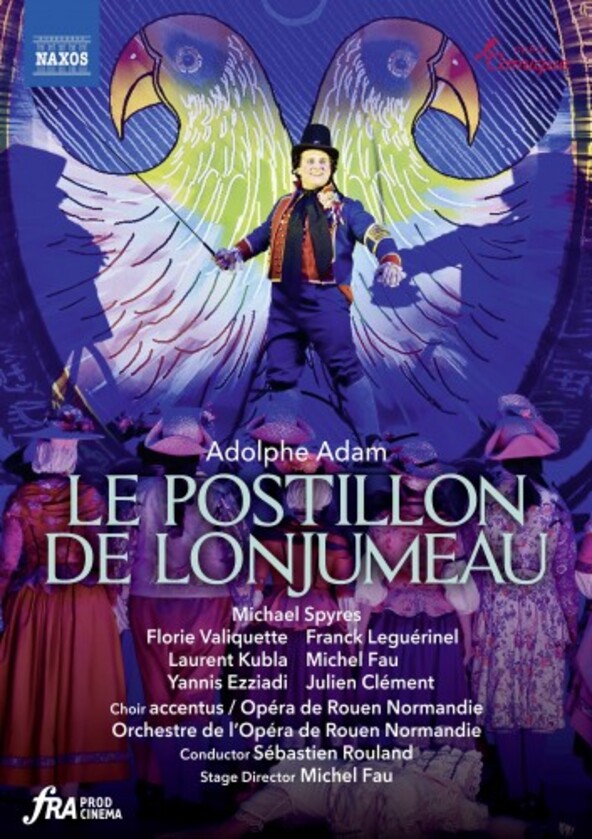 Adolphe Adams Le Postillon de Lonjumeau was a great success at its premiere in 1836, and, along with the ballet Giselle, has remained one of the composers most popular works. Following the great French tradition, this opéra-comique has it all: 18th-century Rococo Parisian glamour and a perilous love story involving the dashing and flirtatious Chapelou and his opposite, the powerful and clever Madeleine. This lavish and spectacular production from the Opéra Comique in Paris received widespread critical acclaim and also features costumes by the iconic French fashion designer Christian Lacroix.
Naxos had success with stage works by Adolphe Adam in the past, including the ballet Le Corsaire (2110594 / NBD0090V) summed up as a hugely enjoyable romp by MusicWeb International, and the music of the even more famous ballet Giselle (855075556) given three stars by The Penguin Guide.
A co-production by Opéra Comique with Opéra de Rouen Normandie, this 2019 performance was well received by critics, Classical Voice North America providing an extensive review: Differentiating between action and contemplation, Michel Fau mounted large ensembles using the full stage, with arias and intimate dialogues performed in a shallow space in front of a painted drop curtain. The production became a fairy tale with heart and humour... Sébastien Rouland, general music director of the Saarbrücken Staatstheater, conducted the Orchestre de lOpéra de Rouen Normandie with energy and a relaxed sense of pacing. The excellent choral artists of accentus/Opéra de Rouen Normandie sounded and looked splendid.
The production featured a notable cast. Classical Voice North American wrote of the soloists: Franck Leguérinels consummate performance as a comic singer-actor, pop-eyed and mustachioed like Groucho Marx, leading the action forward throughout the evening, was outstanding. But it was soon clear that Michael Spyres is also an excellent comedian, and his vocal virtuosity is such that he can afford to play with it almost self-mockingly, throwing in extra Ds (or higher?) with a wink and a grin.
Cast:
- Chapelou / Saint-Phar: Michael Spyres (tenor)
- Madeleine / Madame de Latour: Florie Valiquette (soprano)|
- Le Marquis de Corcy: Franck Leguérinel (baritone)
- Biju / Alcindor: Laurent Kubla (bass-baritone)
- Rose: Michel Fau (actor)
- Louis XV: Yannis Ezziadi (actor)
- Bourdon: Julien Clément (baritone)
Stage director: Michel Fau
Set designer: Emmanuel Charles
Costume designer: Christian Lacroix
Lighting designer: Joël Fabing
Make-up designer: Pascale Fau
Picture format: NTSC 16:9
Sound format: PCM stereo and DTS 5.1
Language: French
Subtitles: French, English, German, Japanese, Korean
Region code: 0 (worldwide)
No. of discs: 1 (DVD 9)