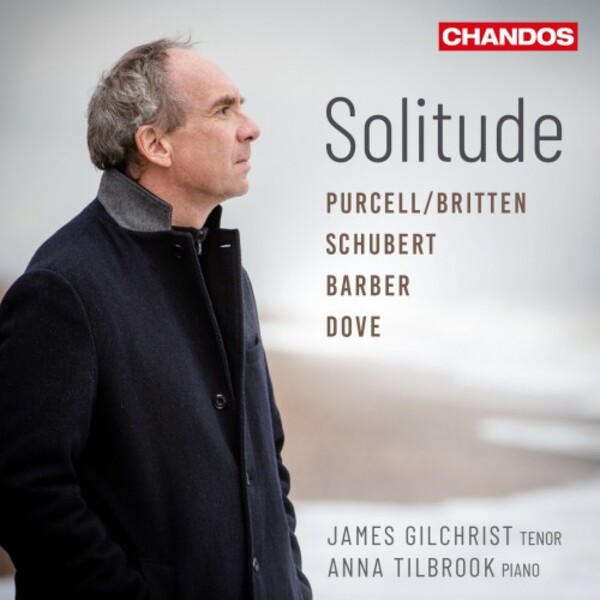 James Gilchrists theme for this recital, Solitude, is reflected in varied and contrasting ways by the four works. In his booklet note, he describes solitude as A state of being that we need, that perhaps we overlook too easily, that is harder to achieve and harder to endure and understand than we expect.
Henry Purcells O! Solitude, my sweetest choice (in the arrangement by Benjamin Britten) focuses on twin themes of solitude: the peace found in the meditative state and the pain felt by being separated from loved ones.
Schuberts Einsamkeit represents the importance of solitude as an important theme in the German romantic tradition: yearning for homeland, the lonely wanderer, and separated lovers appear again and again in the poetry, prose, and music of this era.
In Under Alterd Skies, Jonathan Dove explores the unwanted solitude of grief and loss. The cycle sets excerpts of In Memoriam, Alfred Lord Tennysons response to the sudden death of his friend Arthur Hallam.
The programme closes with Samuel Barbers Hermit Songs, settings of the marginal jottings of mediaeval Irish monks as they copied or illuminated manuscripts. These extraordinary texts show the anonymous men, who chose a life of solitude and devotion to God, to be every bit as human as the rest of us!
Gilchrist sings with pure unaffected beauty, matched by Tilbrooks sincere feel for RVWs limpid accompaniments.  The Observer (CHAN10969)
Gilchrist and Tilbrook... lend delectably wise advocacy to the Songs of Travel... This is a strongly recommendable issue.  Gramophone (CHAN10969)
Gilchrist is his own man: a fine artist and particularly well suited to these songs. Anna Tilbrook is the totally admirable accompanist.  Gramophone (Lennox Berkeley, CHAN10528)
These are wonderful songs of loss and regret tinged with melancholy at the passing of the seasons and the transience of human existence: Gilchrist and Tilbrook make them their own.  International Record Review (CHAN10528)

Although recorded back in June 2019, James Gilchrists latest disc for Chandos is peculiarly apposite for these extraordinary and testing times. Entitled simply Solitude, it presents settings of texts focusing on various aspects of the solitary state, its advantages and its challenges. Regardless of its prescience, this is a beautifully thought-through recital, chronologically wide-ranging and sung with enormous sensitivity by Glichrist, superbly supported by his regular accompanist Anna Tilbrook.

They open with Purcells sublime O Solitude, my sweetest choice, a masterly setting of three verses from Katherine Philipss translation of La solitude by Antoine Girard de Saint-Amant. Performed in Brittens beautifully restrained realisation for voice and piano, this song gets to the heart of the melancholy fascination with the lone existence by setting the text over a ground, a repeated bass-line of the sort that Purcell specialised in. Gilchrist successfully highlights the obsessiveness that this device implies, while rising to the technical and expressive challenges set by the composer. In particular, the sighing phrases just after the midpoint and the gaunt emptiness of the close register powerfully, and the piano accompaniment is perfectly weighted by Tilbrook, resulting in a performance of great potency.

After this striking opening, the rest of the disc consists of three song cycles that present highly distinctive takes on solitude, whether sought or imposed. Schuberts rarely-recorded Einsamkeit, D620, a setting of a cycle of paired stanzas by Johann Mayrhofer, dates from 1818. Probably composed in response to Beethovens recently published, groundbreaking An die ferne Geliebte (arguably the first musically coherent song cycle), its six sections present a stages of man progress from youth to old age, considering the benefits as well as the material and romantic yearnings of the lone individual as he goes through life. Deserving of far greater exposure than it normally receives, Einsamkeit emerges here with clear anticipations of Schuberts later song cycles, but also with a clear identity all its own. Gilchrist, one of our great Lieder singers, ably partnered by Tilbrook, does this masterpiece full justice in a performance bursting with character but also retaining a classical poise.

Jonathan Doves Under Alterd Skies (2017) is a powerfully affecting setting of verses from Alfred Tennysons In Memoriam A.H.H., written in memory of his close friend Alfred Henry Hallam, who died suddenly in 1833 at the age of just 22. Doves minimalist-infused textures, with frequent use of ostinato textures, and clearly delineated harmonic direction, highlight the vast emotional range of youthful grief at the loss of a dear companion, from introspection to anxiety and longing. This is a work of great lyrical passion, as befits a setting of Tennysons highly personal text, and Gilchrist and Tilbrook respond with a combination of tonal focus and emotional intensity that is immensely involving.

Last but by no means least are Barbers Hermit Songs from 1952-53, 10 songs which set marginal jottings by Irish monks that reveal various takes on the life of the hermit, who chooses solitude over life in society, has pangs of passion, but ultimately finds solace in the monastic existence. Encompassing moments of humour as well as tenderness and insight, the texts prompted Barber to some of his finest and best-known vocal music, and Gilchrist gives a marvellously responsive performance with a wide expressive gamut. Highlights include the haunting Crucifixion, the toccata-like Sea-Snatch and the enigmatic Promiscuity, all underscored by Tilbrooks finely nuanced and expertly idiomatic playing.

Whatever the present circumstances, this is a fascinatingly conceived and compelling vocal recital, magnificently recorded and further enhanced by thoughtful, illuminating notes from Gilchrist himself. The aptness of the subject, however, gives it an extra urgency and edge, making it priority listening for all lovers of song.

Together these [works] make for a rewarding programme that repays concentration. Gilchrist is, as ever, a hugely clear and communicative singer, in perfect balance with Tilbrooks sense of focus and poise As a team, they are highly effective at building slow-burning tension, shaping long crescendos while holding just a little bit back.  Erica Jeal
The Guardian 9 July 2020