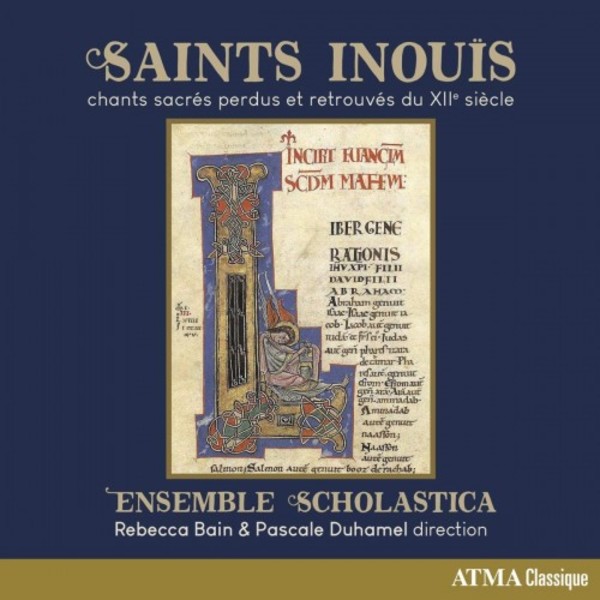 With Saints inouïs, Ensemble Scholastica offers a unique exploration of medieval sacred music from the Creuse (France), a musical heritage dating back nearly a thousand years.
These distinctive songs were composed and sung for liturgies in honour of Saint Pardoux, Saint Yrieix, and the Conception of the Virgin. Ensemble Scholastica is Canadas only female vocal ensemble specialising in the performance of medieval plainchant and polyphony from the 9th to the 14th centuries.
The service for St. Yrieix is likely the oldest of those presented on this recording: the modal formulas and ranges are typical of the Gregorian repertoire of the great manuscripts of the 10th and 11th centuries. The services for St. Pardulf and the Conception of the Virgin likely date from the 12th century, when liturgical chant had already distanced itself considerably from the earlier tradition.
Founded in 2008 by musicologist Pascale Duhamel, Ensemble Scholastica is a group of talented and dedicated vocalists from Montréals thriving early music community, some of whom also play medieval instruments. Leading medievalist Rebecca Bain has directed the ensemble since 2012.
Contents:
Feast of the Conception of the Virgin
1. Salve virginale
2. Alme virginis Marie
3. Priusquam in utero
4. Egredietur virga
5. Iesse virgo celi scala
6. Beatus venter
Office for St. Pardulf
7. First reading from the Life of St. Pardulf
8. Regem humilium
9. Organ improvistaion on Regem humilium
10. Pardulphis largus
11. Ut quoque te miris
12. Cossessas ut opes
13. Second reading from the Life of St. Pardulf
14. Arnulphus sprevit
15. Organ improvisation on Arnulphus sprevit
Office for St. Yrieix
16. In fide recta
17. Catolica religione V. A Christo quoquem
18. Traditui a parentibus
19. Organ improvisation on Traditui aparentibus