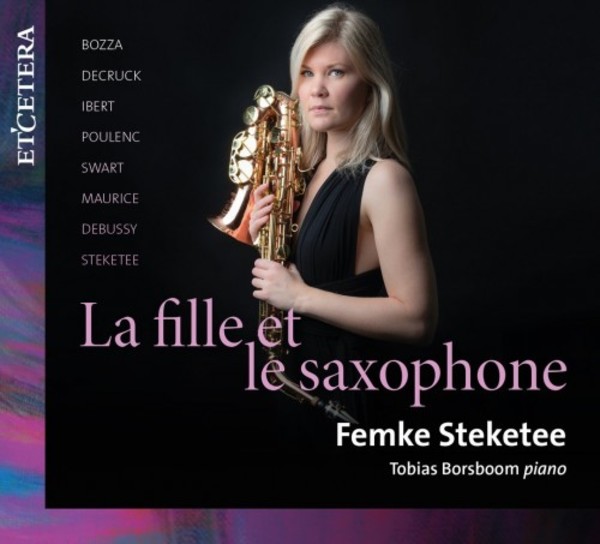 Rhapsody for alto saxophone and piano or orchestra, L98

Rhapsody for alto saxophone and piano or orchestra, L98

La fille et le saxophone contains a selection of the works for saxophone and piano that I love the most. Its my debut CD and is also the first great accolade for the work that Tobias Borsboom and I have carried out as a duo, since my former teacher Arno Bornkamp first suggested that we perform together in 2014. Time and again I am inspired not only by his subtle playing  and pianists fear the saxophone repertoire  but also by his poetic and colourful interpretations. Its a great honour for me to have made this CD with him, with works that I grew up with and which have always been important to me: they have accompanied and become a part of key events in my life.  Femke Steketee
When Adolphe Sax first began to develop the saxophone family in 1840, he visualised an instrument that combined the power of the brass with the flexibility of the strings and the timbre of the woodwind. Today the saxophone is usually associated with jazz, although it was first intended for use in classical music. Apart from a few starring solos in symphonic repertoire, including Ravels Boléro and his orchestration of Mussorgskys Pictures at an Exhibition, Rachmaninovs Symphonic Dances and Gershwins Rhapsody in Blue, the saxophone found no permanent place in the symphony orchestra. The development of the repertoire for the saxophone as a solo instrument and in chamber music was stimulated by the virtuoso playing of the French pioneer saxophonist Marcel Mule. The composers Eugène Bozza, Fernande Decruck and Paule Maurice all wrote for him and created works that would later become cornerstones of the classical symphonic repertoire. Elisa Hall, a wealthy amateur saxophonist, also encouraged composers to write for the instrument during the first years of the 20th century; her many commissions included one to Debussy for a work for saxophone and orchestra, the result of which was his Rhapsody for alto saxophone and orchestra.