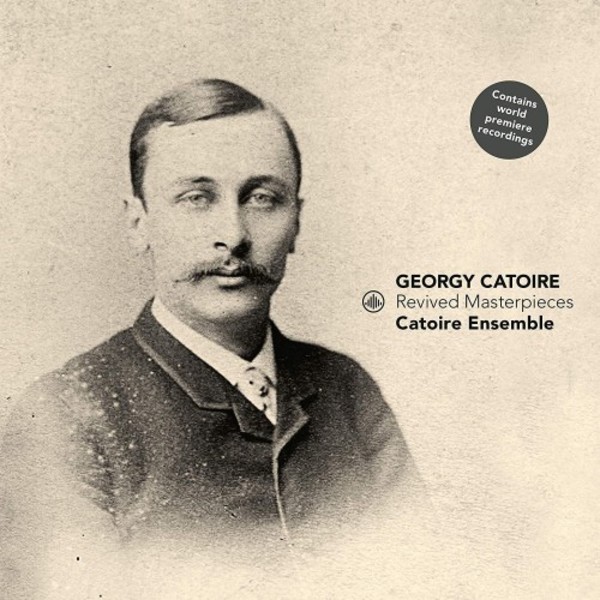 World premiere recordings of some relevant Russian chamber works composed at the turn of the 20th century by Georgy Catoire, performed by the Catoire Ensemble.
Georgy Catoire did not have a high opinion of his own First String Quartet, so he destroyed it, sparing only one part, the Andante. On the last page of the manuscript of this movement, Tchaikovsky wrote a few words, and Catoire did not have the heart to destroy the autograph of the great composer.
Georgy Lvovich composed a new quartet, which in the inventory of his works is listed as op.4. This piece, just like the Andante from the destroyed quartet, was never published and the manuscript seems to have been lost. But it is known that after a while, Catoire reworked the quartet into a quintet, adding a part for a second cello. The manuscript of this quintet, along with the surviving Andante, was discovered several years ago. Thus, the recordings of this quintet and the remaining Andante (from his very first quartet) presented on this disc are the first performances of these early works of Catoire. Catoire composed the Piano Trio op.14 in the years 1899 to 1902.
Stylistically, the Trio can be placed right in the middle of the compositional path of Catoire, which consciously ties in with the creation of this work to the already existing Russian chamber music literature. But although the Trio is so beautifully anchored in its time by such parallels, it clearly embodies the characteristic traits that keep Catoires music away from contemporary trends and that make his personality a special phenomenon in the history of Russian music. There is, for example, the symbiosis of various musical traditions: on the one hand Russian and French by its origin and on the other hand German through his education and profound knowledge of the music of Wagner. Catoire, and thus his style, is a transnational model European. Other important features of Catoires music are honesty and the absence of any kind of banality or pose.
The two Poems op.34 are late works from Catoire and were composed in 1924-26. At the time Catoire, had experienced the Russian Revolution and the Civil War, the death of his beloved wife, and the farewell to his son, who left Russia forever. The music acts like a free speech of the composer in an intimate circle, or even as a soliloquy  so restrained are the dynamics, so freely works the musical speech. In their brief form, the Poems op.34, discovered and published posthumously, are one of the most perfect embodiments of Catoires compositional style.