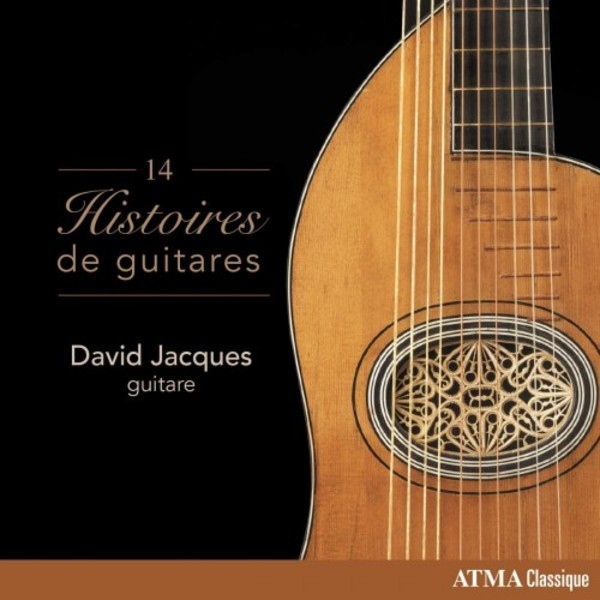 Rondo in B major

» no.5 My lodging is on the cold ground
Balli nazionali, op.24b

Mazurka
Serenade in A minor

A Lost Love, A Lament

» no.3 in D major
Forgotten

Rondo in B major

» no.5 My lodging is on the cold ground
Balli nazionali, op.24b

Mazurka
Serenade in A minor

A Lost Love, A Lament

» no.3 in D major
Forgotten

Classical guitarist David Jacques has assembled a private collection of rare guitars made by the finest luthiers of the past 400 years. With his new album 14 Guitar Stories, Jacques becomes the first guitarist to play all 14 instruments on the same recording. Each guitar is featured in repertoire that is appropriate to the instrument's era, and each has a story to tell.
The guitars featured on the recording span more than three centuries and include early baroque instruments made by Alexandre Voboam around 1665, and by Pracht in 1776; a chitarra battente by Marcus Obbo from 1806; a theorbo-guitar by Villaume et Giron from 1798; a Mast lyre-guitar from 1810; an 1820 string guitar by Joaquin Pages as well as guitars by prestigious makers René Lacôte (1835), Aubry-Maire (c.1830), Guiot (1846), Vicente Arias (1886), Anton Stauffer (c.1840), and Louis Panormo (1832); a rare guitar made by Antonio de Torres in 1887, and finally, a guitar made by Daniel Friederich in 1972.
Guitarist and lutenist David Jacques has a Ph.D. in early music performance from the Université de Montréal. He studied classical guitar at the Cégep de Sainte-Foy, Université Laval, and the Conservatoire de musique de Québec. His discography consists of 50-plus recordings on the XXI-21, ATMA, Oz, and Analekta labels, several of which have been nominated for ADISQ, JUNO, Opus, and ÉCHO Classik prizes. Jacques has been awarded Opus Prizes for three of his discs: Pièces de guitarre de Mr Rémy Médard (2008), Tango Boréal (2012), and Pampa Blues (2014).