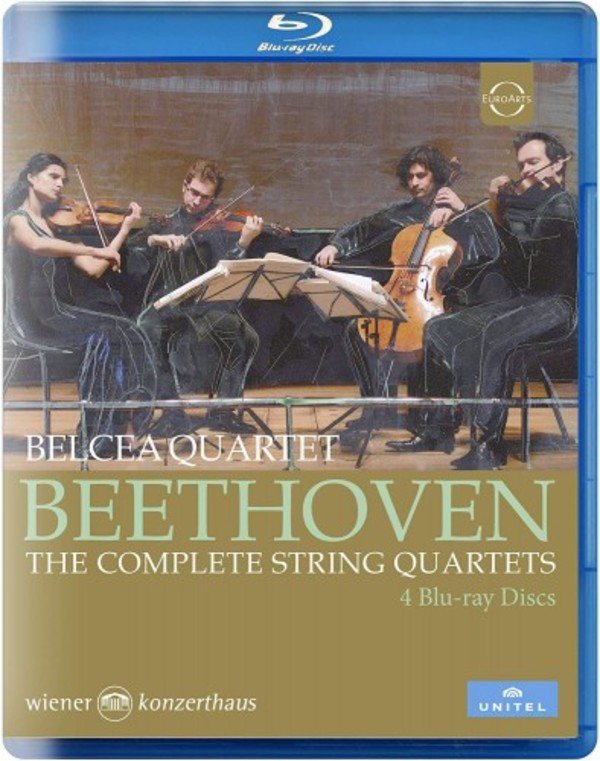 Available again in a repackaged format for the Beethoven Year 2020, this Belcea Quartet box brings a high-definition audiovisual reference recording of Beethovens Complete String Quartets to the market! Since 2006, the only other filmed concert performance of Beethovens quartets available has been the Alban Berg Quartets DVD in 4:3 format. With this edition, released on the occasion of the Belcea Quartets  20th anniversary, EuroArts fills a niche for a high-definition quality audio-visual production of Beethoven s String Quartets available on Blu-ray.
The ensemble embarked on the mammoth task of playing the complete Beethoven string quartet cycle within a space of 12 days, recorded at the Wiener Konzerthaus in 2012. Every concert featured one work each from the early, middle and late quartets, including perhaps the most exciting of all works by Beethoven: Opus 133, the Große Fuge, which he wrote as the finale of the quartet Opus 130. This music, just sounds forever avant-garde, I think in a way that perhaps no music written after the Große Fuge manages to sound to this day, explains the quartets viola player Krzysztof Chorzelski. In this recording, the Belcea Quartet performs the Große Fuge  in one piece with Opus 130, which makes this performance even more thrilling.
This extraordinary edition not only includes the Belceas complete recordings of String Quartets from Vienna Konzerthaus but also a 47-minute bonus documentary On the Paths of the Beethoven String Quartets which brings us closer to the ensembles reflections on Beethovens quartets as well as on this unique project.
Belcea Quartet:
- Corina Belcea (violin)
- Axel Schacher (violin)
- Krzystof Chorzelski (viola)
- Antoine Lederlin (cello)
Picture: 1080/60i Full HD  16:9
Sound: PCM Stereo, DTSH-HD Master Audio 5.1
Language/subtitles: English, Deutsch, Français
Region code: All (worldwide)
Running time: 522 mins + 45 mins (documentary)
Production year: 2012