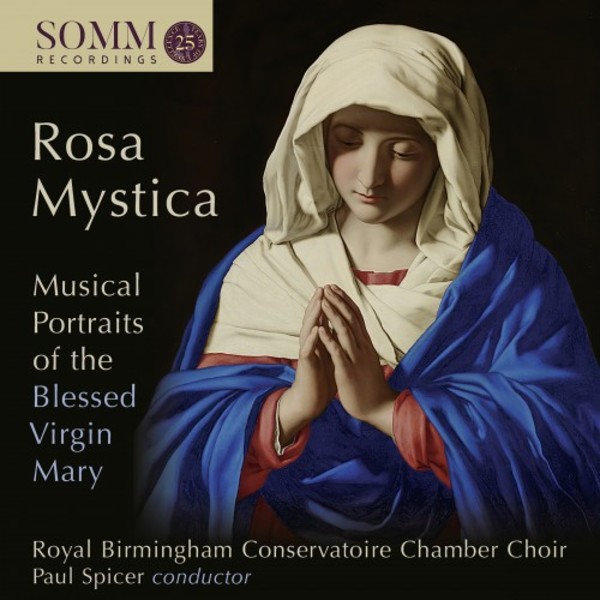 Mother of God, here I stand

Mother of God, here I stand

Conductor Paul Spicer and the Royal Birmingham Conservatoire Chamber Choir return to SOMM Recordings with a ravishing, centuries- spanning recital of musical portraits of the Blessed Virgin Mary.
Rosa Mystica takes its title from Benjamin Brittens passionate setting of Gerard Manley Hopkins and forms the centrepiece of a programme ranging from the glorious Tudor polyphony of Nicholas Ludfords motet Ave cujus conceptio via Bruckners dramatically contrasted Ave Maria to the Norwegian Ole Gjeilos apparently simple but sophisticated Second Eve, composed as recently as 2012.
Two versions of the Magnificat are heard in George Dysons bewitchingly peaceful depiction of the Virgin Mary, composed just after the end of the Second World War, and Herbert Howellss more troubled setting for Chichester Cathedral in 1967.
The enduring fascination with and devotion to Mary in the modern era is represented by a diverse array of composers from the austere, hushed, mystical atmospheres of John Taveners Mother of God, here I stand, the jazz-Blues-accented Ave Maria of Carl Rütti, rich harmonic and colour palette of Judith Binghams Ave Virgo Sanctissima and Trond Kvernos beautiful, unusual setting of Ave Maris Stella to Cecilia McDowalls short but highly effective carol, Of a Rose.
The RBCCC are joined by Spicers student in Birmingham, organist Callum Alger, currently an impressive young organ scholar at Westminster Cathedral.
Paul Spicer and the RBCCCs previous SOMM releases include Partsongs by Sir Charles Villiers Stanford (SOMMCD0128), hailed by MusicWeb International as indispensable listening for all lovers of British music and The Glory and the Dream, choral music by Richard Rodney Bennett (SOMMCD0184), to which Gramophone respectively extended an enthusiastic welcome as well as collections of choral music by John Joubert (SOMMCD0166), Samuel Barber (SOMMCD0152) and Herbert Howells (SOMMCD0140).