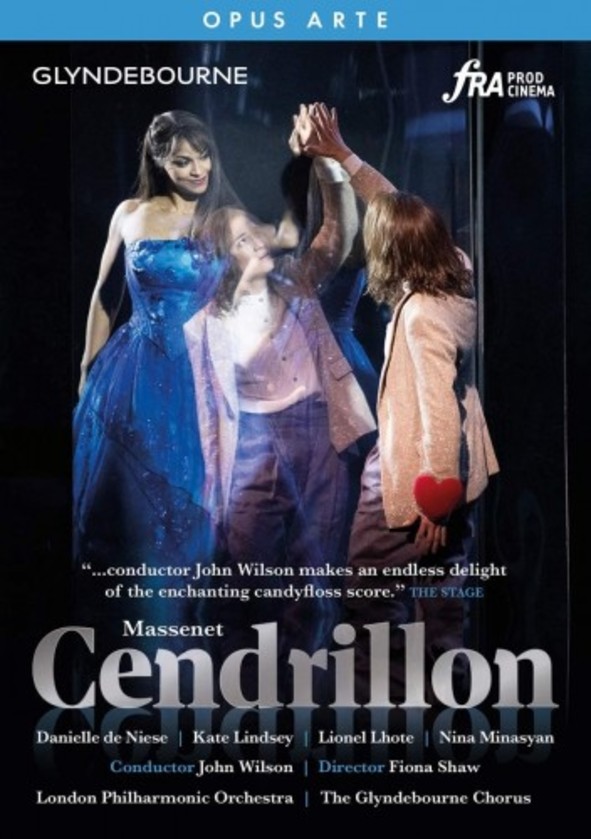 Fiona Shaws production dives deep into the psychological aspects of Massenets glittering Cinderella story.
With its combination of enchanting love story and broad, burlesque comedy, Cendrillon is one of the great operatic fairy tales  a Cinderella that looks back to Charles Perraults original story in all its richness and ambiguity. Massenets sensuous Belle Epoque fairy tale is gilded with lavish orchestral textures and glittering vocal writing, drawing on everything from baroque dances to Wagner-inspired chromaticism to bring its story to colourful life, conjuring a world of infinite musical and emotional variety.
Fiona Shaws original Tour production makes its Festival debut here, re-directed by Fiona Dunn and conducted by John Wilson, with a cast led by Glyndebourne favourites Danielle de Niese as Cendrillon and Kate Lindsey as her Prince.
... conductor John Wilson makes an endless delight of the enchanting candyfloss score.  The Stage ★★★★
A savvy modern-day makeover  The Times
Cinders goes to the ball in fine voice... In the pit, John Wilson, best known for his work in musicals, brings a degree of brashness to the sumptuous score but there is also fine-grained delicacy.  The Evening Standard ★★★★
Enchanting and thought-provoking  Classical Source
A touching production...  The Telegraph
Best of all is the Fairy Godmother, sung by Nina Minasyan. Massenet brings plenty of magic to this role, written for a high coloratura soprano, much of it in wordless vocalise. Manasyan has the ideal lightness and agility of tone, and is aided at each appearance by atmospheric lighting effects and her group of six singing and dancing spirits.  The Arts Desk
In many ways, this is a much deeper Cinderella [than the one] we were all brought up on, which adds to its value as a highly entertaining vehicle for some beautiful singing.  The Express ★★★★
Extra feature: Cast gallery
Cast:
- Cendrillon: Danielle de Niese
- Madame de la Haltiére: Agnes Zwierko
- Le Prince Charmant: Kate Lindsey
- Le Fée: Nina Minasyan
- Noémie: Eduarda Melo
- Dorothée: Julie Pasturaud
- Pandolfe: Lionel Lhote
Director: Fiona Shaw
Revival director: Fiona Dunn
Designer: Jon Bausor
Costume designer: Nicky Gillibrand
Lighting designer: Anna Watson
Directed for the screen by François Roussillon
Duration: approx. 140 minutes
Audio: LPCM 2.0 & DTS Digital Surround 5.1
Subtitles: EN, FR, DE, JP, KO