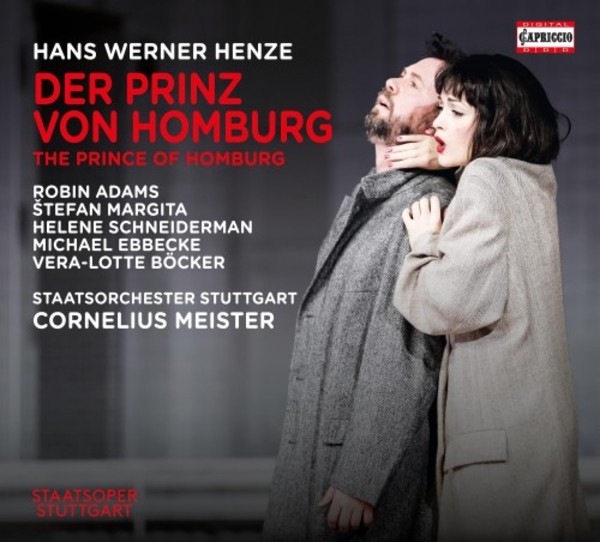 But tell me, who could have written a better libretto for me than my friend Heinrich von Kleist? When I was searching for a language in combination with which my music could produce something new, a diction targeted by my music, I hit on the Prince. [...] The tension between the life of the individual and raison détat, issues as to the disregard of law and order, mans quivering before the might of ruling authorities and the courage to resist it, all of that might happen today or might have occurred one or two thousand years ago. [...] Many of my endeavours in works of recent years appear through this drama to have reached a new point, i.e. a new polyphony and its concomitant, freely chosen rigour.  Hans-Werner Henze
[Cornelius Meister's] total command of the score might have been the most impressive contribution to the evening, but he was supported by a superb cast of actor-singers.  Anthony Ogus, critic
Vera-Lotte Böcker managed to do so admirably, she was always full of expression.  Bachtrack
Cast:
- Friedrich Wilhelm: tefan Margita
- Die Kurfürstin: Helene Schneiderman
- Prinzess Natalie von Oranien: Vera-Lotte Böcker
- Prinz Friedrich Artur von Homburg: Robin Adams
- Feldmarschall Dörfling: Michael Ebbecke
- Obrist Kottwitz: Friedemann Röhlig
- Graf Hohenzollern: Moritz Kallenberg