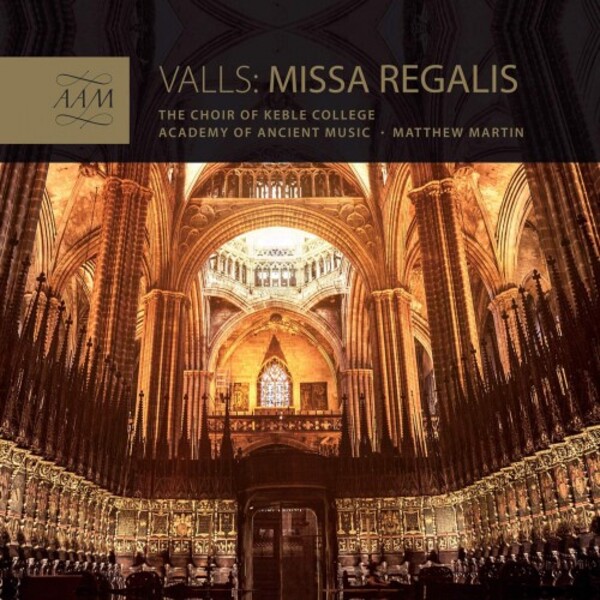 The Choir of Keble College
Academy of Ancient Music

The Choir of Keble College
Academy of Ancient Music

Much of the music of Baroque Spain remains obscure, despite the fact that many Spanish composers of a previous era  Cabazón, Arouxo and Cabinilles  have retained greater notoriety. During the 16th century, Spain benefitted from a rich musical interchange with Italy, but that ran drier by the end of the century and musical influences faded. Spanish music continued to develop from its own resources and the voice of Francisco Valls stands out in this newly arrived Baroque era in Spain. Based in Barcelona, he is best known for various theatrical works and his Missa Scarla Aretina (1702), a controversial mix of old and new, infamous for its flagrant disregard of various established musical practices. The Choir of Keble College is delighted to collaborate with the Academy of Ancient Music to bring to life another important work, Valls forgotten Missa Regalis (1740) in a new edition by Simon Heighes, unlikely to have been heard since part-way through the 18th century. Although smaller scale than his earlier Missa Scarla Aretina, it is a refreshing (and sometimes fascinatingly illogical) combination of ancient and modern. We hope that this recording, and Simons new edition of the score, encourages further performances of this piece along with greater interest into the life and works of this somewhat unconventional musician.

Despite the sterling efforts of a few specialist performers (chief among them Jordi Savall), the Baroque music of the Iberian peninsula still lies very much in the shadows of the rest of western and central Europe. So its a definite cause for celebration that the Academy of Ancient Music hopes to pursue its own series devoted to Spanish and Portuguese Baroque works, the first release of which focuses on the Missa Regalis by Francesc (or Francisco) Valls, sung by the Choir of Keble College, Oxford.
Little is known of Vallss early life, but a growing consensus is that he was probably born in Valencia around 1671. He spent much of his career as mestre de capella at Barcelona Cathedral; today he is best remembered for the controversy surrounding his opulently-scored Missa Scala Arentia (1702), and also for the theoretical work Mapa Armónico Práctico (1741-42) written during his retirement. His musically progressive leanings were conflated by his more conservative contemporaries with his support for the Habsburg cause in the War of the Spanish Succession (1705-14). When Charles of Austria was eventually ousted in favour of the Bourbon Philip V, Vallss days in charge of the Barcelona capella were numbered, and his daring use of unprepared dissonance in a passage of his Missa Scala Arentia was openly attacked, becoming a cause célèbre for traditionalists and progressives alike.
Apart from the Scala Arentia Mass (named after the use it makes of the six-note scale immortalised as a teaching aid by the medieval theorist Guido dArezzo), too little of Vallss music has been recorded. The long-forgotten Missa Regalis, composed in 1740 for King João V of Portugal, is heard here in a new edition by musicologist Simon Heighes in what is a world-premiere recording. And its quite a find: although scored conservatively for five-part chorus plus continuo group, it nevertheless succeeds in artfully blending the traditional with the modern, in a way that only a composer of considerable experience can achieve. Apart from the seemingly austere scoring, the other main traditional element is the re-use of the same Guidonian hexachord familiar from the Scala Arentia Mass. Here, however, it appears in three guises: a straightforward scale, a sequence of four rising thirds, and further sequence of three rising fourths  all helpfully laid out on the manuscripts title page! Other nods to tradition are the tripartite division of the Kyrie (each section of which uses one of the aforementioned hexachord incarnations), the multi-section Gloria and Credo, and the absence of a Benedictus following the Sanctus.
These conservative elements are offset by the wonderfully diverse and accomplished ways in which Valls deploys his compositional materials, creating music of fabulous textural richness by the simultaneous use of upward and downward figuration, diminution and augmentation. More specifically, the skilful use of expressive dissonance, both in the Gloria and, above all, in the Credo from the words Et incarnatus est onwards produces music of rare emotional power, depth and responsiveness. And it helps that the young, mixed voices of the Keble College Choir, under the expert direction of Matthew Martin, have just the sort of vibrant yet focused tone that this music needs, both in the introspective passages that lie at its heart and in the livelier outer sections of Gloria and Credo, as well as in the marvellously concise yet uplifting Sanctus. The upper parts have a purity that readily evokes the boys voices with which Valls would have worked on a daily basis, while the lower parts have a welcome sonorousness to them.
The Academy of Ancient Music itself here numbers just three continuo players: Joseph Crouch on bass violin, Inga Klaucke on dulcian (a forerunner of the bassoon), and on organ no less a figure than Edward Higginbottom. They give expert, subtly coloured support to the choir throughout. Providing musical rather than liturgical context for the Mass, Matthew Martin himself takes to the organ of St Johns College, Oxford, for three wonderfully contrasting 17th-century tientos (keyboard fantasias): one by the Valencia-based Juan Cabanilles (1644-1712), and two by an acknowledged master of the genre, Francisco Corrêa de Arauxo (1584-1654), the first of them wonderfully flamboyant, the second a virtuoso piece requiring a particular Spanish type of divided keyboard which facilitated the simultaneous use of different stops on a single manual. All receive splendidly idiomatic performances by Martin at the 2008 Bernard Aubertin organ of St Johns Chapel, successfully recreating a soundworld with which Valls would certainly have been familiar.
Martin and his choir clearly have an understanding of this music that is both informed and instinctive. They are supported by a very believable recording, as well as by exceptionally generous documentation on Valls, the Mass itself, the organ works, and the wider Iberian organ tradition. For lovers of Baroque music who want to explore beyond the familiar highways and byways, but with no loss of quality, this disc will really whet the appetite: do try it!