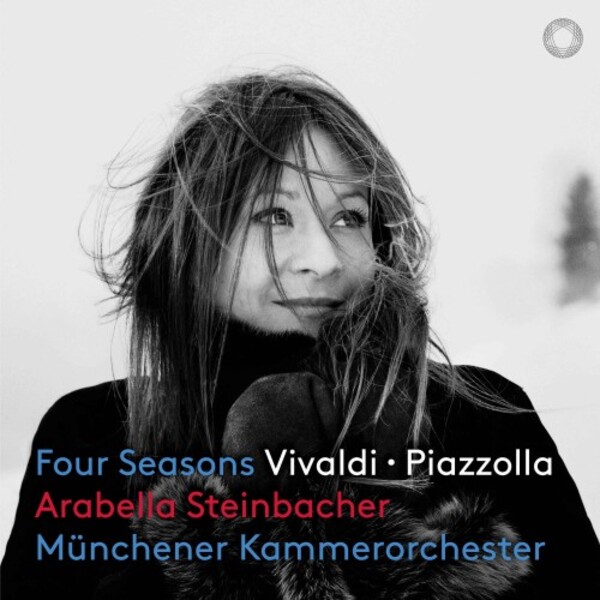 Star violinist Arabella Steinbacher presents Antonio Vivaldis world-famous Four Seasons alongside Astor Piazzollas Cuatro estaciones porteñas, creating a lively combination of baroque and tango. The enormous popularity of Vivaldis Four Seasons tends to make us forget the original and ground-breaking nature of these violin concertos. Coupling them with Piazzollas tango-inspired Four Seasons of Buenos Aires makes both pieces sound fresher than ever before, thanks to Steinbachers personal engagement with the repertoire and the inspired accompaniment of the Münchener Kammerorchester. Piazzollas music is performed here in a new arrangement for violin and string orchestra by Peter von Wienhardt, whose Strauss song arrangements on Steinbachers previous album Aber der Richtige ... (2018) were extensively praised by the press.
Arabella Steinbacher, a multiple award-winner with an extensive PENTATONE discography, is accompanied by the players of the Münchener Kammerorchester, who make their PENTATONE debut.

Initially on the Orfeo label and, since 2009, exclusively on Pentatone, the German violinist Arabella Steinbacher has been building up an impressive catalogue of recordings, both in chamber repertoire and in a steady series of concertos ranging from Mozart, Beethoven and Brahms to Prokofiev, Shostakovich, Hindemith and Britten. Faultless technique and intonation have gone hand-in-hand with imaginative programming, and its no surprise that she now has quite a following, both among critics and with the larger record-buying public.

For her latest release Steinbacher visits one of the most recorded works in the repertoire, Vivaldis ubiquitous Four Seasons, coupling it (as other artists have increasingly done in recent years) with Ástor Piazzollas tango-infused Four Seasons of Buenos Aires. The programming might perhaps seem generic to those of a jaded outlook, but the performances, with Steinbacher directing the Münchener Kammerorchester from the violin, are so unfailingly musical and involving as to silence all criticism. Each Vivaldi concerto is preceded by the equivalent season from Piazzolla (SpringSpring, SummerSummer, etc.), but beyond that there is no fancy interleaving or trying to match northern and southern hemisphere seasons.

With the Piazzolla works, composed between 1965 and 1970, when they were eventually performed as a set, one of the main points of interest with this new recording is the arrangement, made specially for Steinbacher by Peter von Wienhardt, rather than the more widely used version by Leonid Desyatnikov. Wienhardts robust, earthy but also sophisticated scoring points up the many similarities between these works (especially in Spring to Autumn, less so with Winter) and the neoclassical Stravinsky. Bass lines are marvellously supportive but they also swing, while textures are vividly animated, and the solo violin really sings out. Aside from an insistently buzzing guiro at the opening of Summer, the scoring is exclusively for strings, but Steinbacher and her Munich colleagues bring out all the colour and soulfulness of the music with their depth and richness of tone, finely-honed dynamics and responsiveness to mood. Moments of dreamy abandon alternate with infectious, and sometimes explosive, nuevo tango inflections. The first section of Winter is particularly virtuosic, before eventually subsiding into gentle reverie.

Another strength of Wienhardts arrangement, and of Steinbachers performance, is that it doesnt force the parallels with Vivaldi: intertwined as they are, each composers work stands on its own merits. The Vivaldi works themselves, which have been presented in ever more daring and audacious period or HIP recordings in recent years, here enjoy the benefit of exceptionally fine and fundamentally musical performances in the modern style that was once the norm, enhanced by playing of exceptional finesse and sensitivity. Theres a harpsichord continuo (which weaves gentle arpeggios around the sustained string chords of Autumns slow movement), speeds are generally brisk, and textures are clear, but beyond that there is no HIP posturing. Instead, Steinbachers exceptional artistry and the refined support of the Munich band very much allow the music to make its own case.

There have been more brazenly descriptive performances of The Four Seasons on disc (the dog barks of the solo viola in the second movement of Spring, for example), but few such enjoyably musical ones. And, as the set progresses and the listener adjusts to this less-is-more approach, the illustrative aspects of the music seem to grow stronger: the exhausting heat and sudden storms of summer, the rustic revelry and thrill of the hunt in Autumn, the biting chill and fireside warmth of Winter. Complementing the Piazzolla perfectly, these are deeply rewarding performances that are likely to stand the test of time for those who appreciate high-quality playing in the modern manner. And, as always with Pentatone, they are matched by exceptionally fine recording, making this addition to a crowded catalogue and to Steinbachers ever-broadening repertoire particularly welcome.