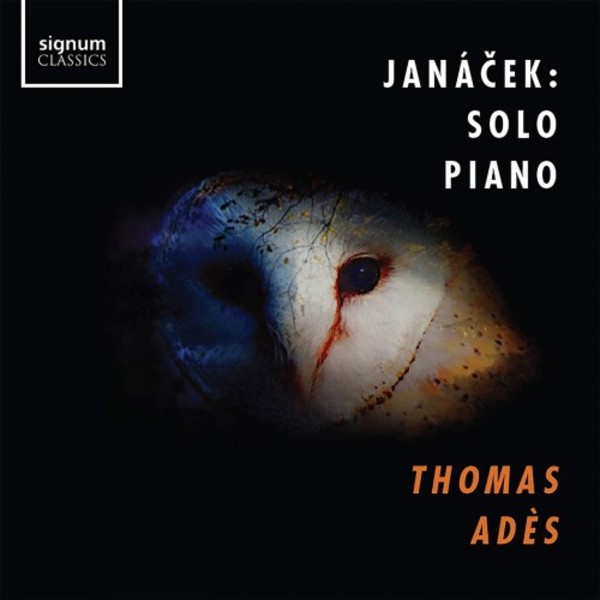 Nearly all of the music for solo piano written by Leo Janáček (18541928) dates from before the First World War and thus belongs to the period before the composers remarkable late creative surge, which was triggered by the hugely successful 1916 production in Prague of his third opera, Jenůfa (18941903; rev. 19078), and facilitated by his retirement from his teaching position at the Brno Organ School. Nevertheless, all three of Janáčeks major solo piano works  On an Overgrown Path (19001911), From the Street 1 October 1905 (1905-6) and In the Mists (191213)  contain music that is both profoundly individual and also integral to the now widespread view of the composer as one the most original musical voices of early twentieth-century music.
Thomas Adès was born in London in 1971. He studied the piano with Paul Berkowitz at the Guildhall School, winning the Lutine Prize for piano, before continuing his studies at Kings and St Johns Colleges, Cambridge. Dr Adès has given solo piano recitals at Carnegie Hall, New York and the Wigmore Hall and the Barbican in London, and appeared as a soloist with the New York Philharmonic. He has performed Schuberts Winterreise extensively throughout Europe with Ian Bostridge and in 2018 recorded it at the Wigmore Hall. In 2018, following a recital of Janáčeks music at the Reduta Theatre in Brno, Janáčeks home town, he was awarded the Leo Janáček prize.

Janáčeks output of music for solo piano, though small, ranks among the most intensely personal and affecting of the 20th century. Once the preserve of just a few Czech pianists, such as Rudolf Firkuný and Josef Páleníček, it has increasingly attracted the attention of such international artists as Leif Ove Andsnes, Marc-André Hamelin and Stephen Hough. Now Thomas Adès, better known from recent releases as composer-conductor, brings his own distinctive take to this music, and its little short of revelatory. Adès has long experience with Janáčeks music, having accompanied Ian Bostridges highly-regarded recording of The Diary of One Who Disappeared; and after playing the solo piano works at the 2018 Brno Janáček Festival he was awarded the Janáček Prize, describing it as the greatest thrill of his life.

Adèss affection for this music is strongly evident from the way he approaches it. There is none of the pulling about of tempi, the heart-on-sleeve rubato that is virtually ubiquitous in performances of this music. Instead, the listener is struck by the pianists direct, unaffected, almost prosaic manner in the opening pieces of the cycle of miniatures On an Overgrown Path. But then you start noticing the detail: the careful shaping of the phrases and the weighting of main and subsidiary voices. The earliest of these pieces originated in a request for harmonium works based on the most beautiful Slavonic melodies, and although Janáček (in typical fashion) wandered off from the initial brief, those simple origins are vividly conveyed by Adèss honest artistry. This is music that combines two threads: childhood memories, and the death at the age of 21 of Janáčeks daughter Olga, the source of deep and lasting emotional pain. Adèss keyboard touch ranges from the delicate (the openings of Our Evenings and They Chattered like Swallows), through the sombre (The Madonna of Frýdek) and fragile (Good Night!), to the powerfully haunting (The Barn Owl has not Flown Away!), and each miniature is in turn endowed with a vast but concentrated emotional gamut. He includes four of the five movements that make up the second series of the cycle, omitting only the incomplete Vivo movement, and its especially good to have the polonaise-like Allegro fourth movement (omitted in Jan Bartos recent Supraphon recording) included here.

In 1.X.1905 From the Street (an elegiac tribute to a young demonstrator for a Czech university in Brno, bayoneted and clubbed to death by Austrian forces in October 1905), it is Adèss calm, deliberate approach that creates the space for a huge dynamic and expressive range, with real strength and focus given to the fortes and fortissimos. Though only a torso (Janáček destroyed the original third movement, and attempted to destroy the others: luckily for us the original pianist kept a copy), this is a uniquely powerful work, its two movements, Presentiment and Death complementing one another while being thematically linked. The latter is particularly potent here, rising from the bleak opening to a climax of overwhelming force before subsiding into empty devastation. Like all the music here, its brilliantly captured by producer Tim Oldham and engineer Mike Hatch in Londons Henry Wood Hall.

Composed seven years after From the Street, the four-movement cycle In the Mists is more ambitious in scale than On the Overgrown Path, and combines Janáčeks own distinctive voice (by 1912 he was on the verge of the late creative flowering that ushered in his greatest operas, choral and orchestral music) with nods towards the Impressionism of Debussy and a more cosmopolitan outlook. Though the individual pieces lack titles, there is the same combination of pained nostalgia, regret, oppressiveness and outbursts of rage that can be found in the earlier cycle, but magnified and extended; and Adèss playing here is just as disarmingly direct as in the earlier works, with a real feeling for the textures and colours of the music, every strand emerging with bold clarity. In the achingly wistful closing movement, he opts for Janáčeks original figuration towards the end rather than Václav těpáňs souped-up, pianistic revision, putting his faith in the composers original thoughts, as one creative artist responding to another.

Despite a suggestion on page 4 of the booklet that the disc was originally to include the brief late piano piece Reminiscence (1928), there are just the three major piano works here, and its really all the listener needs in performances which allow the music to speak with such immediacy. This is a major addition to the Janáček discography, and deserves to be in every piano lovers collection.

Its apparent from the get-go that Adès is determined to check all expressive clichés at the recording studio door, accept Janáčeks plain-spoken syntax and lack of artifice for what they are, and simply play the music straight. No gratuitous taperings, emphatic accents or ritards where the composer indicates none.  An illuminating release.  Jed Distler
Gramophone June 2020