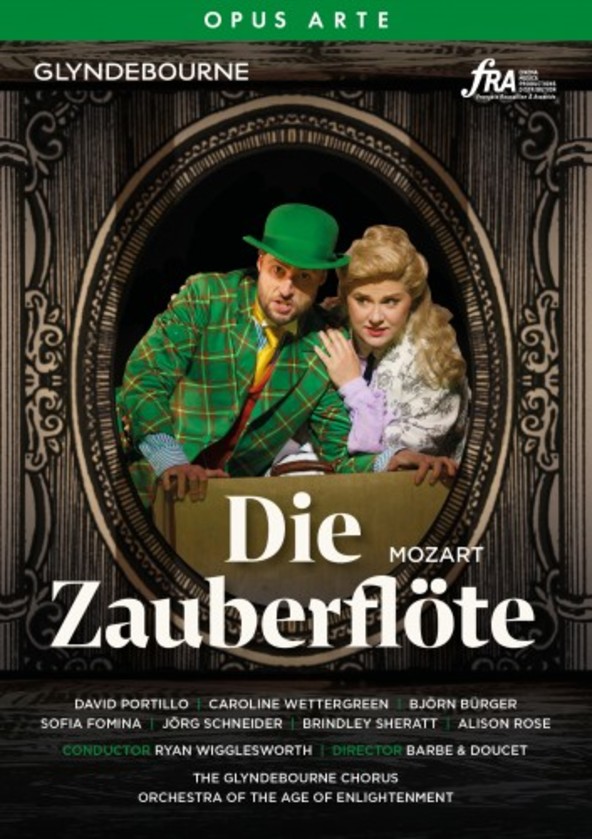 A fresh and playful production of Mozarts comic opera full of colour and puppets.
One of Mozarts most enchanting works, Die Zauberflöte is a fairy tale that uses familiar archetypes to ask provocative and difficult questions about religion, the nature of power, the bonds of family, and of course love.
Premiered just months before Mozarts death, Die Zauberflöte in many ways represents a new departure for the composer. Catching the spirit of revolution in the air, Mozart turned his attention for the first time from court opera to popular opera, writing this Singspiel (sung-play) for a new and much broader audience.
Celebrated Canadian directing duo Barbe & Doucet make both their British and Glyndebourne debuts here with their new Die Zauberflöte, a veritable theatrical feast of eccentricity (The Guardian). Ryan Wigglesworth conducts an outstanding cast including Russian soprano Sofia Fomina as Pamina, David Portillo as her beloved Tamino, Brindley Sherratt as Sarastro, and the ebullient Björn Bürger as Papageno.
 bold, inquisitive playing from the Orchestra of the Age of Enlightenment under Ryan Wigglesworth in the pit, and uniformly enjoyable singing up top.
Bürger was the most handsome-sounding Papageno Ive recently heard; David Portillo, as Tamino, found his inner hero... and Sofia Fomina (Pamina) sang with a radiance that shaded over into ecstasy  every inch the daughter of a Queen of the Night who combined needlepoint vocal daring with a surprising vulnerability.
 The Spectator
David Portillos sweetly sung Tamino is complemented by Sofia Fominas forceful Pamina, whose singing gains in beauty as the evening progresses; Björn Bürgers Papageno is a commanding comic creation, while Caroline Wettergreen as Queen of the Night atones for some weird top notes in her first aria with some lovely singing later on. Jörg Schneiders Monostatos makes an engaging pantomime villain; Michael Krauss Speaker has eloquent authority, and Brindley Sherratt conveys majestic power through the concentrated stillness of his Sarastro.  The Independent
Extra features: The Making of the Magic; Cast Gallery
Cast:
- Tamino: David Portillo
- Pamina: Sofia Fomina
- Sarastro: Brindley Sherratt
- Queen of the Night: Caroline Wettergreen
- Papageno: Björn Bürger
- Monostatos: Jörg Schneider
- Papagena: Alison Rose
- Speaker: Michael Kraus
Direction and designs: Barbe & Doucet
Puppet designer: Patrick Martel
Directed for the screen by François Roussillon
Duration: approx. 170 minutes
Audio: LPCM 2.0 & DTS Master Audio 5.1
Subtitles: EN, FR, DE, JP, KO