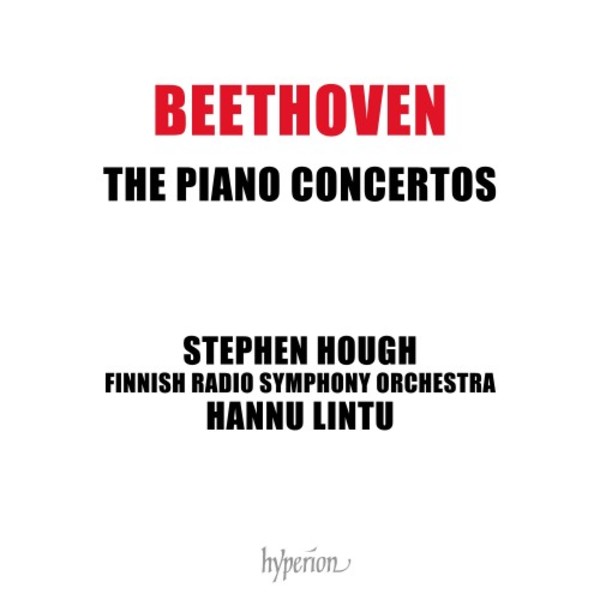 Hearing Stephen Hough over the course of one of musics most exhilarating odysseys is not an opportunity to be missed, especially when that odyssey encompasses the five piano concertos of Beethoven. Recorded following a cycle of live performances in Helsinki, this magnificent set is sure to be recognized as one of Houghs most important recordings.

Beethovens five numbered piano concertos span a good two decades, from 1787/88 (when the B flat major Concerto, subsequently published as no.2, first began to take shape) to 1809, the year of the mighty Emperor Concerto. These were crucial years in Beethovens stylistic development, and the piano concertos chart his gradual move away from the Viennese classicism of Mozart and Haydn to the giddy heights of his own Heroic middle-period style. Although conceived for public performance, they reveal much about various facets of his inner character. They also form a cornerstone of the concerto repertoire, a huge leap forward in a genre that would come to dominate concert life in the centuries ahead.

Pianists from Schnabel, Backhaus and Kempff to Arrau, Gilels, Brendel, Pollini and Perahia (to name just a few) have made their mark in these works. Now Stephen Hough, having already set down acclaimed accounts of piano concertos by Hummel, Saint-Saëns, Tchaikovsky, Rachmaninov, Schumann and Brahms, at last turns his attention to Beethoven. Recorded in June 2019 in the vineyard-style concert hall of the Helsinki Music Centre, they followed a pair of public concerts in which Hough, together with the Finnish Radio Symphony Orchestra under Hannu Lintu, performed all five works. Those performances were to serve as the basis of the CD recordings, with patching sessions to follow. However, Hough took the bold decision to effectively bin the results and re-record the works in their entirety at the subsequent sessions, using a completely different instrument (a Bösendorfer Vienna Concert model), but with the experience of the live concerts still fresh. The results are really rather special, even in such frequently recorded repertoire, combining Houghs innate musicianship and poetic feeling with his ever-questing intellect and scholarly examination.

Benefitting from an evidently close working partnership with Lintu and the Finnish orchestra, these are tremendously rewarding performances, immensely stylish, lean-textured yet far from anaemic, with the full power of a modern concert grand and a (chamber-sized) symphony orchestra to draw on, yet with plenty held in reserve. The first two concertos, which most clearly reveal Beethovens musical debts to Mozart and Haydn, are treated to robust readings, full of Beethovenian vigour and wit, the outer Allegro movements never taken so hurriedly that the view cannot be savoured, with rhythms nicely sprung (notably in the first movement of the C major Concerto) and articulation crystal-clear. Textures are lit as if from within, and there are several nice interpretative touches, such as the perceptible quickening in pace for the central swinging A minor episode in the C majors Rondo third movement. In that First Concerto, Hough opts for what he calls the short, sweet, stylish cadenza rather than the more often heard big fat one, while in the Second he replaces Beethovens own anachronistic cadenza composed many years after the rest of the work with his own, much more in keeping with the improvisatory feel and scale that is appropriate here. In both these concertos, as with all the works here, the heart of Houghs interpretation lies in the slow movements: wistfully prayerful in the Adagio of the Second, meltingly sensuous in the Largo of the First with its lovely clarinet-dominated hues.

The Third Concerto is in the archetypically Beethovenian key of C minor, yet the light and shade revealed by the orchestra (not least the woodwind section) again highlight the musics roots in Mozart, and not just in the latters C minor Concerto K491. Here, the super-responsive touch of the piano provides full vindication of Houghs choice of instrument, marrying depth and roundness of tone with fabulous transparency, and matched by the sweet-toned strings of the orchestra. Theres a hushed intensity to the central Largo, while the C major coda to the Rondo finale feels much more integrated, less tacked-on that it can sometimes seem. Rarely have the pre-echoes of the Fourth Piano Concerto in the Third been so apparent.

The Fourth Concerto itself, one of the great miracles in Beethovens output, receives a very special performance, the contrasts between the soloists calm introspection (the first chord is gently arpeggiated) and the more questioning, challenging persona of the orchestra readily apparent without feeling in the least bit forced. At the same time the expansion of Beethovens tonal and expressive palette is keenly felt by the performers. Witness the first movements magical development, where delicacy of timbre and subtlety of rubato go hand-in-hand, carrying over into the recapitulation; or again, the sensitive gradation of colours in the Orphic dialogue of the central Andante, profoundly affecting yet with no hint of contrivance. The concluding Vivace then feels less like a safety valve than a newly-won state of happy equilibrium, reflected in the chamber-like string textures and wind interjections.

Symphonic-scale grandeur is provided by the Emperor Concerto, occupying a disc of its own, another unhurried yet poised and vibrant performance. Here again Hough springs a surprise at the outset, playing with the orchestra on the first chord and providing the otherwise missing harmonic fifth clearly indicated in the original manuscript by Beethoven but rarely if ever heard in performance. The sense of joy in music-making, obvious throughout this set, is at its most uninhibited here, with glorious contributions from horns, trumpets and drums, tempi judged to nicety (the Adagio is indeed taken at a delectably flowing un poco moto), with phrasing and dynamics having all the naturalness of fresh concert experience.

Is this as good as it gets for those wanting a stylish modern-instrument performance of these ever-popular works? Quite possibly! These are beautifully thought-out but natural-sounding readings, free of gimmickry yet full of insight, every bit the equal of the best of Houghs previous works. With orchestral playing as accomplished as the solo work, this is an exceptional collaboration, superbly captured by sound engineer Enno Mäemets and producer Laura Heikinheimo. Stephen Hough is donating all of his royalties from this album to the charity Help Musicians at a crucial time for so many: yet another good reason to buy it!

It is a tribute to the quality of Stephen Houghs musicianship that the new cycles most memorable performance should be that of Beethovens Janus-like Third Piano Concerto, the one  on record at least  that has often proved the most elusive.  the unassuaged boldness of the performance of the Third Concerto is so impressive.  its the very refinement of Houghs playing that makes for such close listening.  Richard Osborne
Gramophone June 2020