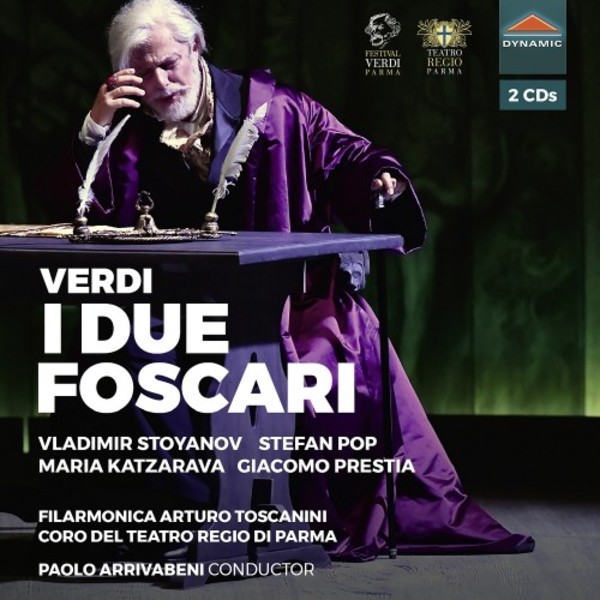 Verdi - I due Foscari

This opera was recorded at the 2019 Festival Verdi in a new coproduction from Teatro Regio di Parma and Teatro Comunale di Bologna.
I due Foscari, a tragedia lirica in three acts based on a work by Lord Byron, was premiered in 1844. It proved quite popular for the next fifty years, thanks in part to its brevity and ease of staging; in fact its Verdis shortest opera. The composer also revised the libretto by the rather inexperienced Francesco Maria Piave. From the musical point of view, this work is characterised by extreme simplicity of form and by the use of distinctive themes for each character, reminiscent of the Leitmotiv technique. The simple plot describes the mortal hatred between a Venetian gentleman, Jacopo Loredano, and two members of the Foscari family  the Doge Francesco and his son Jacopo  whom Loredano holds responsible for the deaths of his his father and uncle. The effectiveness of this recording stems from both the cast of singers (notably Vladimir Stoyanov in the role of Francesco Foscari) and the orchestra under Paolo Arrivabenis direction.
Paolo Arrivabeni is a highly experienced, international conductor who specialises in this repertoire.
The audience paid a tribute of ten minutes applause to all the artists, with a triumph for Stoyanov.  The Opera Critic
The baritone Vladimir Stoyanov gave an absorbing portrayal of Francesco Stefan Pop sang with ringing tone and strongly projected Jacopos volatile emotions Paolo Arrivabenis conducting was a mixed blessing. He showed affection for the work in the way he brought out details.  The New Criterion
Cast:
- Francesco Foscari: Vladimir Stoyanov
- Jacopo Foscari: Stefan Pop
- Lucrezia Contarini: Maria Katzarava
- Jacopo Loredano: Giacomo Prestia
- Barbarigo: Francesco Marsiglia
- Pisana: Erica Wenmeng Gu
- Attendant on the Council of Ten: Vasyl Solodkyy
- Servant of the Doge: Gianni De Angelis