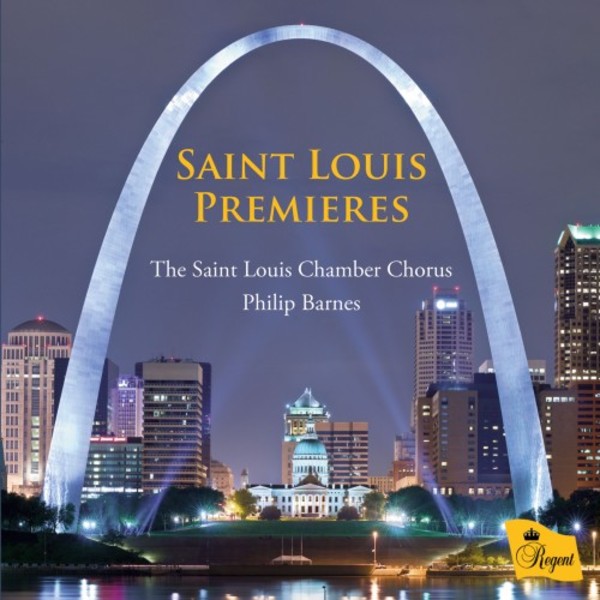 In the bleak midwinter
On friendship

That I did always love

It is not for kings, Lemuel

Drink to me only with thine eyes (arr. Jon Garrett)
Maker of all things (arr. Orin Johnson)

In the bleak midwinter
On friendship

That I did always love

It is not for kings, Lemuel

Drink to me only with thine eyes (arr. Jon Garrett)
Maker of all things (arr. Orin Johnson)

This is the seventh release from The Saint Louis Chamber Chorus on Regent.
The Chorus is one of the largest commissioners of new choral music anywhere in the world, with an extensive annual programme featuring new works from both well-established and emerging composers, with a particular emphasis on female writers.
This new recording features a selection of eleven recent commissions, with music in a very wide range of styles, ranging from virtuoso works by Gabriel Jackson, Jonathan Dove, and Judith Bingham to bawdy drinking songs from Robert Walker, and an imaginative suite based on ancient dance forms from Melissa Dunphy.
There are two new works from one of Latvias most distinguished composers, Ēriks Eenvalds: a setting of the familiar words of In the bleak midwinter, and On friendship  a wonderfully-expressive tribute to a former long-term member of the Chorus.
The selection is completed with new works from two former composers in residence with the Chorus  Clare Maclean and Sasha Johnson Manning.
This recording not only demonstrates the broad range of composers typically commissioned to write for the Chorus, but the consummate technical and musical accomplishment of the group under the inspiring direction of their conductor, Philip Barnes.
The Chorus performs with uninhibited passion and clarity.  American Choral Journal (REGCD472)
The performances are consistently outstanding.  BBC Music Magazine ***** (REGCD414)
Consummate attention to blend, clarity and expressive nuance.  Gramophone (REGCD414)
The Saint Louis Chamber Chorus sing with polish and a full, well balanced tone throughout, caught in splendid sound Gramophone (REGCD255)