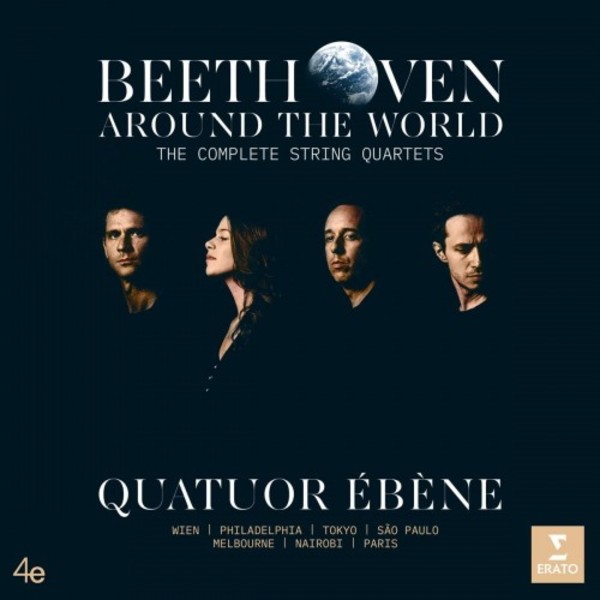 Beethoven Around the World - The Complete String Quartets

One of Eratos major projects for the Beethoven anniversary year with a truly global scope, recorded between May 2019 and January 2020 in seven major world cities: Philadelphia, Vienna, Tokyo, Sao Paulo, Melbourne, Nairobi and Paris. Supported by a huge tour in 2019- 2020 covering Asia, Africa, Australia, US, Africa and Europe. Liner notes are by the cellist of Quatuor Ébène, Raphaël Merlin, who has written comments on the recordings in each city. The first album, featuring the Razumovsky Quartets recorded in Vienna received great critical acclaim, Choc of the French magazine Classica, December 2019.

Beethovens 16 string quartets occupy a place of honour in the chamber repertoire and, like his nine symphonies and 32 piano sonatas, trace his progression through his creative life. 2020 marks the 250th anniversary of the composers birth, and Quatuor Ébène is recognising this with an extensive tour, entitled Beethoven Around the World, which runs from Spring 2019 to December 2020. Over that period the French ensemble will give over 120 concerts in a total of 21 countries on six continents, focusing on complete cycles of the quartets from February 2020.

Speaking of the ongoing tour, the members of Quatuor Ébène say: This is where Beethoven goes global. The quartets are 16 masterpieces that form an eternally modern artistic canon of unparalleled breadth and depth  they translate the purest humanity into music. In themselves they represent an odyssey, a round-the-world voyage. The players believe that the composers music transcends all linguistic, geographical and political borders ... Both modern and timeless, it is universal. It cannot be readily classified as Classical or Romantic, as German, or even as Western, but it is music that expresses itself freely and which addresses the audiences of the future rather than its own time  It can seem complex at first, but everything becomes clear as its essence emerges.

The ensemble also emphasises that: The quartet as a genre gives individual players the chance to shine, yet is simultaneously predicated on collaboration and concord: it shows democracy in action. Its emotional and intellectual power is considerable, yet it is also universally accessible as it embodies underlying ideals  enlightenment, fraternity and humanism, as typified by Goethe and by Schiller in his Ode to Joy [the inspiration for the final movement of Beethovens 9th Symphony]. At the same time it is informed by Kants ideas on morality, goodwill and the categorical imperative, all of which were gaining currency in Beethovens time. It also reflects the German philosophers view of our relationship with the natural world, which has such resonance for the environmental issues of today.
Appropriately, the tour will be associated with a carbon offset programme devoted to reforestation.
Beethovens music is music that expresses itself freely and which addresses the audiences of the future rather than its own time  Quatuor Ébène