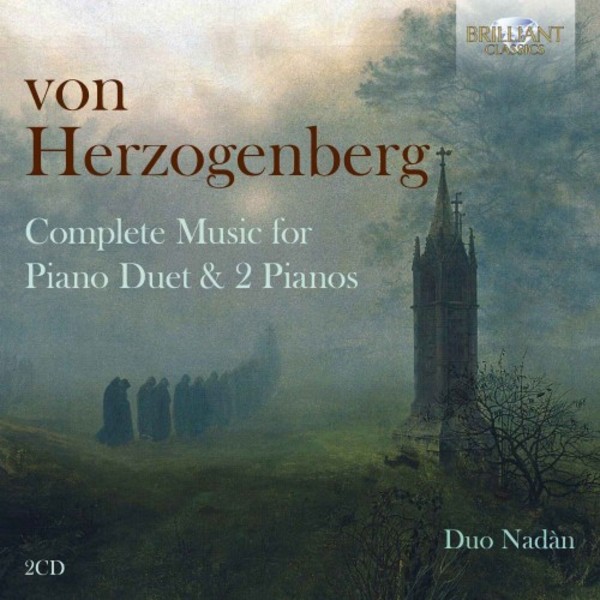 Including several first recordings, the only complete set of attractive and entertaining piano works by a notable if little-known figure in 19th-century German music.

Almost all good Romantic-era composers knew how to have fun at the piano, all the more so with a friend. Schumann and Brahms wrote some of their most unbuttoned music in this genre, and their example was followed by Heinrich von Herzogenberg (18431900). From a generation after Brahms, he venerated the older man, and having maintained a relationship  somewhat strained on Brahmss part  since their first meeting, he came in 1868 to marry Elisabeth von Stockhausen, who herself had been a pupil and close friend of Brahms, who would often write them letters together (and then more private ones to Elisabeth).

Von Herzogenberg left grand themes and forms to his many works in other genres such as quartet and oratorio. There are five variation sets here  one on a theme by Brahms, the others of his own invention  and several collections of dances, equally cheerful and often whimsical in disposition: music to be enjoyed in the playing as much as the listening. There are two collections of Allotria  from the Greek, meaning strange or foreign things  each containing three pieces, and the second set here receives its first recording. Von Herzogenbergs handling of harmony is at its most ingenious here, and his northern-accented melodies are especially original.

The sisters Nadia and Angela Tirino have played together since childhood, and they share that intimate understanding, musical instinct and equality of partnership common to first-class sibling piano-duets. Having both studied at the conservatoire in Florence, they live and work there, teaching and performing, but also joining the jury of distinguished piano competitions around the world. This von Herzogenberg release is their first internationally available album.

Heinrich von Herzogenberg (1843-1900) was an Austrian composer and conductor of French aristocratic descent. In his youth he was attracted by the music of Wagner but after studying the works of J.S. Bach he turned to the classical tradition and became a strong supporter of Johannes Brahms. He married Elisabet von Stockhausen, a piano pupil of Brahms, and the three of them formed a close bond of friendship.

Probably, the great relation with Brahms may be one of the main causes of the oblivion that enveloped the figure of the composer Herzogenberg who, although recognized as a witness and interpreter of the great German romantic tradition and capable of absolute originality and expressive refinement, has over the years the fame of simple epigon of the great Hamburger.

This 2-CD set presents the complete music for piano duet (4-hands and two pianos) by Herzogenberg, a collection of Waltzes, Ländler and sets of Variations, which show a remarkable composer with a keen sense of atmosphere and a personal voice of his own.

Played by the Duo Nadàn, formed by Angela and Nadia Tirino, with great sensitivity and elan. They also wrote the extensive liner notes in the booklet.