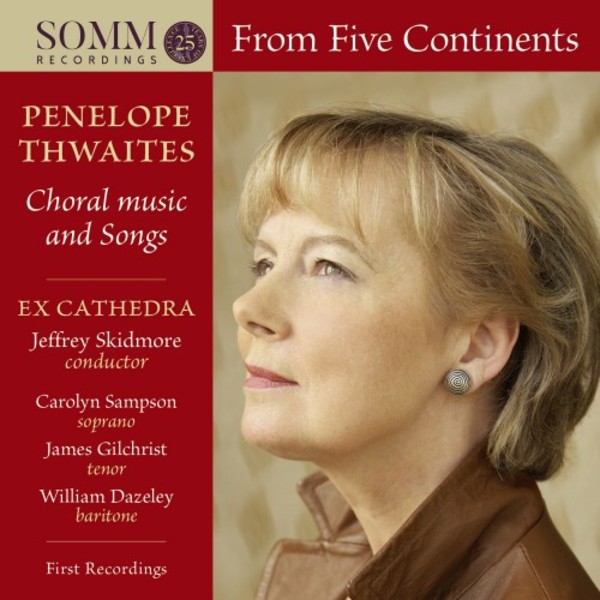 Christmas Songs (2)
India - Australia - Africa
Lead, Kindly Light
Love Songs (3)
Missa Brevis
Psalm 19: The heavens tell out the glory of God
Psalm 23: The Lord is my Shepherd
Psalm 24: The earth is the Lord's
Psalm 121: I will lift up mine eyes
Shakespeare Songs (5)
St Teresa's Bookmark

Christmas Songs (2)
India - Australia - Africa
Lead, Kindly Light
Love Songs (3)
Missa Brevis
Psalm 19: The heavens tell out the glory of God
Psalm 23: The Lord is my Shepherd
Psalm 24: The earth is the Lord's
Psalm 121: I will lift up mine eyes
Shakespeare Songs (5)
St Teresa's Bookmark

SOMM Recordings is delighted to announce the release of an intriguing new recording, introducing the melodious, rhythmically vibrant choral music and songs of Penelope Thwaites.

Featuring 19 premiere recordings, From Five Continents celebrates a lifetime of making music around the world to showcase Thwaitess distinctive compositional signature. The discs centrepiece, a moving new Missa Brevis, is coupled with four Psalm settings, songs influenced by the sounds of Indian and African music, folk-styles from the Americas and an evocation of the vast Australian outback.

Enveloped by drums and saxophone, tenor James Gilchrist returns to SOMM for a stirring tribute to Nigerias second-largest city, Kano. The composer herself provides exceptional accompaniment on piano throughout the disc.

Also returning to the label is Ex Cathedra under their inspiring conductor Jeffrey Skidmore to demonstrate again a rare versatility and the most beautiful of choral sounds while revelling in the punchy, rhythmic vivacity and telling colours of Thwaitess music.

Thwaitess previous release on SOMM was the premiere recording of the concert version of her musical co-written with Alan Thornhill, Ride! Ride! (SOMMCD 017) which featured Keith Michell as the 18th-century religious and social reformer John Wesley. The strength of Alan Thornhills libretto and the sheer variety of Thwaites music combine to create a compelling aural drama, said Gramophone.

Penelope Thwaites is also internationally known as an acclaimed pianist and editor of the widely admired The New Percy Grainger Companion (Boydell Press, 2010).