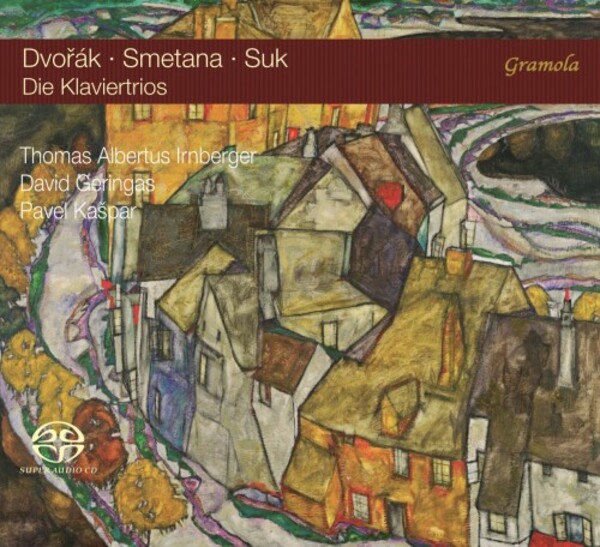 The growing national consciousness of the European peoples in the 19th century led to numerous innovations and changes in many countries that had hitherto held onto the artistic models of Central and Western Europe. In the case of Czechoslovakia in the Austro- Hungarian monarchy, Antonín Dvořák is besides Bedřich Smetana and Josef Suk probably the composer that first comes to mind who masterfully understood how to weave into their works the essence of the popular folk songs and dances. Thomas Albertus Irnberger, violin, Pavel Kapar, piano, and David Geringas, cello, present the four piano trios by Dvořák as well as the piano trios by Smetana and Suk on this 3-SACD box.

Pavel Kapar studied with Prof. Rudolf Macudziński in Bratislava, Prof. Frantiek Rauch in Prague and then with Prof. Ludwig Hoffmann in Munich. The Czech pianist holds regular concerts throughout Europe, Israel, Turkey, China, Mexico, the USA and Canada. His CD with piano works by Ludwig van Beethoven and Joseph Haydn was released by Artesmon in 2010 and the same year another CD with the Czech flautist Roman Novotný with works by Francis Poulenc, Bohuslav Martinů, Darius Milhaud and François Born. For the Swiss label Tudor, Pavel Kapar recorded the piano works by Bohuslav Martinů on four CDs, earning the very best reviews from the international press.

Thomas Albertus Irnberger is among Austrias leading violinists. The German specialist press wrote: like hardly any other young artist in his field, in recent years Irnberger has secured himself a leading position amongst Europes violinist elite. His recordings have regularly been the recipients of prizes and top rankings from the international press. Since 2008 Thomas Albertus Irnberger has devoted himself to research into and the rediscovery of ostracised composers, and in Israel he played the first performance of the Violin Concerto by Hans Gál.

David Geringas Born in Vilnius/Lithuania, the cellist and conductor David Geringas is today numbered among the elite of music. His intellectual severity, stylistic versatility, his melodic feeling and the sensuality of the sound he produces have brought him awards from all around the world. A former student of Rostropovich and winner of the first prize and the gold medal at the Tchaikovsky competition (1970), he can now look back on a career that has extended over decades.