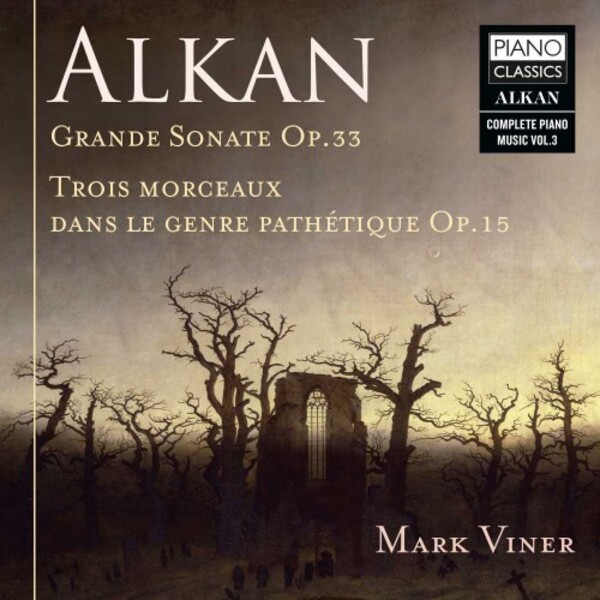 Volume 2 in what is set fair to become the definitive Alkan cycle on disc.

Mark Viners Piano Classics albums of rarities and masterpieces from the high noon of the virtuoso age have attracted bouquets of praise from international magazines. Most recently he released Alkans 25 Préludes dans tous les tons majeurs et mineurs, op.3 (PCL10189) to great acclaim: This is a superb disc, beautifully recorded and another feather in the cap of this remarkable British pianist (Gramophone).

For Viner, Alkan himself is the most enigmatic figure in the history of music  but also one of the most intriguing and alluring names among the pantheon of pianist-composers. He feels that the Op.33 Sonata is, quite simply, the greatest French piano sonata of all, and plays it with commensurate passion and conviction.

Composed in the late 1840s and published in 1848, the sonata outlines four decades in the life of man, from the twenties to the fifties, within a conventional, albeit highly expanded and imaginatively embellished four-movement structure. However, Alkan stressed that his intention was not to compose imitative or literal tone-painting: the first piece is a Scherzo; the second an Allegro; the third and fourth an Andante and a Largo; but each one of them corresponds, in my mind, to a given moment of existence, to a particular disposition of thought.

The earlier Souvenirs  Trois Morceaux dans le genre pathétique, op.15 (1837) is Alkans first foray into large-scale structures with the third pieces recapitulation of ideas from the previous two, constituting a single unity through their half an hours duration; three highly original tone poems, one evoking the howling winter wind, one a love poem and the third Morte evoking a haunted cemetery, uncannily pre-echoing Ravels Le Gibet.

Viners previous recording of the Alkan Etudes, op.35, received 5 stars and CD of the Month in BBC Music Magazine as well as 5 stars in The Guardian (Viner rises to Alkans extraordinary challenges).

The booklet contains an excellent essay on Alkan and his works by the artist himself.
Viner shows he is an impressively unflappable interpreter of this sometimes extraordinary music His playing is never showy; he emphasises that these are profound explorations of early romantic sensibility first and extreme technical challenges second, and that is a totally convincing way of dealing with some of the most remarkable piano music of its time.  The Guardian
For the second disc in his gargantuan 17-CD project of recording all Alkans music Mark Viner gives us the 25 Préludes with an exemplary musicianship and assurance...makes you eager for further issues from this outstanding and most enterprising pianist  Bryce Morrison, International Piano