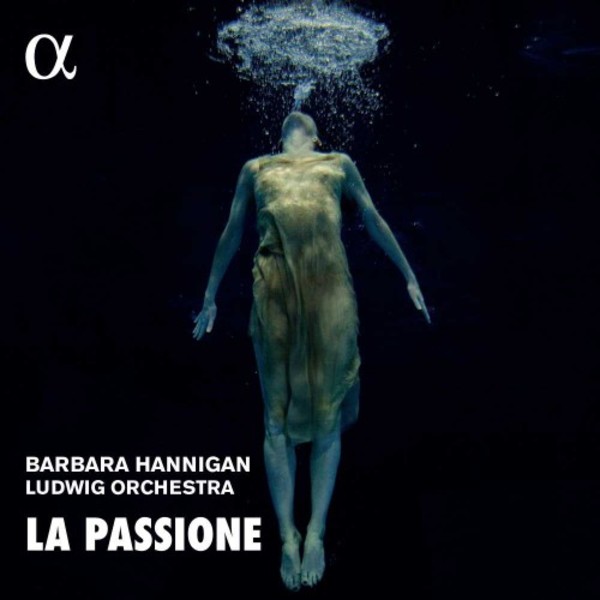 The starting point for Barbara Hannigans third recording for Alpha is a work by Gérard Grisey (1946-98) that is particularly close to her heart. Grisey wrote: I conceived the Quatre Chants pour franchir le seuil [Four songs for crossing the threshold] as a musical meditation on death in four parts: the death of the angel, the death of civilisation, the death of the voice and the death of humanity... The texts chosen belong to four civilisations (Christian, Egyptian, Greek, Mesopotamian) and have in common a fragmentary discourse on the inevitability of death.

Luigi Nono (1924-90) was a politically engaged composer. His stunning monody Djamila Boupachà, a heart-rending cry for solo soprano, pays tribute to a freedom fighter tortured by French paratroopers during the Algerian war; Picasso also portrayed her in charcoal. Once again Barbara Hannigan both sings and directs this pair of twentieth-century works with her friends of the Ludwig Orchestra. She has chosen to couple them with a Classical symphony by the master of the genre, Joseph Haydn, which also deals with the theme of the Passion. Her interpretation is extremely intense and highly personal.

La Passione is Barbara Hannigans third disc for the Alpha label, and by some distance the most emotionally intense. Hannigan herself describes it as a triptych: 3 images, three perspectives of transfigured nights. The highly personal programme combines the modern and the Classical in startling but illuminating juxtaposition. It opens with the sound of the solo human voice: Luigi Nonos Djamila Boupacha is a 1962 setting of Jesus Lopez Pachecos poem inspired by the eponymous Algerian freedom fighter, whose torture and rape while under arrest produced a French backlash against the Algerian War. A tour de force of what Hannigan terms modern bel canto, its as musically striking as it is emotionally draining. Hannigan must be among the few artists who can deliver it with such a combination of pinpoint clarity, passionate involvement and phenomenal dynamic range. At just five minutes in length, this is a work that packs a punch far beyond its slender means and modest duration, a remarkable tribute to a remarkable woman (and, at the age of 82, Boupacha is thankfully still with us, a living inspiration to women everywhere who stand up to injustice).

Emerging from the dying strains of Djamila Boupacha, Haydns Symphony no.49 in F minor (inauthentically nicknamed La Passione) can rarely have had such an impact as it does here. This 1768 symphony is the epitome of Haydns Sturm und Drang style, even though it probably began life (like so many of his symphonies at that time) as theatre music. Its da chiesa form (two slow movements alternated with two fast ones) is here given a performance of daring intensity, the opening Adagio twice the length of some rival versions, and played by the strings of the Ludwig Orchestra with all the expressive range available to modern instruments. On the repeats, Hannigan adds a lone (and probably anachronistic) harpsichord, weaving its way through the textures like a dark, lost angel, expertly realised by Tineke Steenbrink. The succeeding Allegro di molto bursts definitely into life, its wide leaps, relentless energy and stark dynamic contrasts coming across as remarkably modern in this context. Theyre pushed to extremes by Hannigan, the strings digging in with real bite, the horns almost braying, yet somehow still retaining the vestiges of an historically informed foundation. The Trio to the sombre Minuet is the only major-key respite; taken at a faster, danceable tempo, it emerges like a mirage amidst the pain, and disappears almost as quickly. The Presto finale is driven every bit as much as the second movement, the strings swelling and subsiding at lightning speed, their multiple stops delivered with bold panache. Few others would dare perform Haydn this way these days, but Hannigan and her colleagues bring it all off with their forthright conviction.

Haydn in turn gives way to the whispered winds that open Gérard Griseys astonishing Quatre chants pour franchir le seuil (Four songs to cross the threshold), his last completed work before his death at the age of 52 in 1998. Its four texts are taken from Christian, Egyptian, Greek and Mesopotamian cultures, successively labeled The death of the Angel, The death of civilisation, The death of the voice and The death of humanity. Scored for soprano and an ensemble of fifteen instruments, this is a uniquely powerful work of hypnotic textures and remarkably virtuosic vocal writing. The penetrating trumpet of Cyrus Allar deserves special mention, but all the instrumentalists, from the evocative percussion to the growling tuba and funereally tolling harp, are on their mettle here. The gentle hues of the second song (accompanying the reading of barely legible inscriptions from ancient tombs) are particularly affecting, while the craziness of the fourth acts like a shocking wake-up call with its screeching single reeds and violent drums (evoking scenes from The Epic of Gilgamesh). The closing Berceuse seems to hold out some hope of redemption, or at least some sort of resolve. In these troubled times, it makes a particularly powerful impression, and the disc as a whole, while not for the fainthearted, has an expressive directness that will surely speak honestly as well as imaginatively to many listeners.

On Barbara Hannigans recording with the Ludwig Orchestra, she pairs Quatre Chants with a Haydn symphony, No 49 in F minor, which gives its nickname, La Passione, to the entire disc. Hannigans performance of the Grisey (which she conducts as well as sings)  evokes the works haunting, unclassifiably expressive world more vividly than ever.  Andrew Clements
The Guardian 26 March 2020