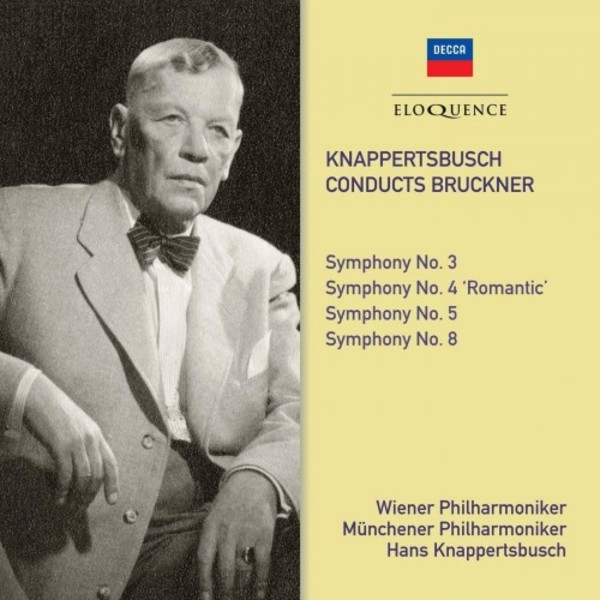 Newly remastered and gathered under one roof for the first time, the Decca recordings of Hans Knappertsbusch conducting Bruckner: a legendary combination.

For record collectors in the 1950s and 60s, the names of Bruckner and Knappertsbusch (Kna) were practically synonymous. At a time when the composers symphonies were routinely compared to Gothic cathedrals, the rough grandeur, steady pulse and towering climaxes of these readings marked out the conductor as an architect of symphonic majesty.

Record companies did not have to work hard to cultivate this image, thanks to Knappertsbuschs craggy visage, imposing presence on the podium and decades of Wagnerian experience at Bayreuth. At a time when Wagners Parsifal was still experienced as a primarily sacred music drama, the major works of Bruckner were likewise understood in semi-sacred terms as concert-hall rites, and who better to pierce their mysteries than Parsifals pre-eminent interpreter?

Knappertsbusch began recording Bruckner for Decca in 1954, with the Third. The Fourth and Fifth quickly followed, also from Vienna, and then the Eighth arrived as an appendix from Munich, first issued on the Westminster label in 1963. By then the conductors readings of Romantic repertoire had become less impulsive, even more monumental in concept, but still lightened by a natural feeling for the dance rhythms in Bruckners scherzos and Ländler themes.

Knappertsbusch persisted in conducting from editions prepared by Bruckners pupils, notably the Schalk brothers, with their liberal re-scorings and cuts, to the finales in particular  all outlined in a perceptive booklet essay by Antony Hodgson. In the light of recent scholarship and a more nuanced perspective on Bruckners evolving intentions with the composing and revising of his symphonies, these performances gain a certain, compelling authenticity of their own. No Brucknerian can afford to be without them.

The performance is admirable ... Definitely a record to add to the library.  Gramophone, December 1954 (no.3)

The best so far. There is less heaviness, more flexibility and true Viennese spirit in his reading than in any of the others.  High Fidelity, March 1956 (no.4)

I think Bruckner himself would have hoped for something like this rather bluff, unromantic sound. Knappertbusch welds the whole into a most convincing unity.  Gramophone, January 1957 (no.5)

Both the orchestra and the recording technicians have done all that can be done to present the work in the best possible light. The tone of the Viennese strings is beautifully reproduced and the brass sounds both solid and resplendent... Knappertsbusch handles the work with the expertness of an able and experienced conductor.  Musical Times, March 1957 (no.5)

Knappertsbusch could be a notoriously diffident conductor under studio conditions, but the mood was evidently upon him when he taped this Bruckner symphony... The leisurely, methodical pacing and warm, ideally weighted instrumental glow make the reading an eminently attractive one... The early stereo still sounds splendid.  High Fidelity, August 1971 (no.5)

There is much beauty in Knappertsbuschs benign treatment of the Adagio, and his Scherzo... is winged and appealing. The Munich orchestras string section plays with fine purity and silken transparency.  High Fidelity, December 1963 (no.8)

Convincing eloquence... [Knappertsbusch] makes of the first three movements a wholly absorbing experience. He achieves a more than usually effective integration of polyphonic and dynamic detail with extended phrasing and the projection of structural line.  Stereo Review, April 1964 (no.8)

This may be of the old school and unfashionable, but its unbeatable.  BBC Music Magazine (no.8)