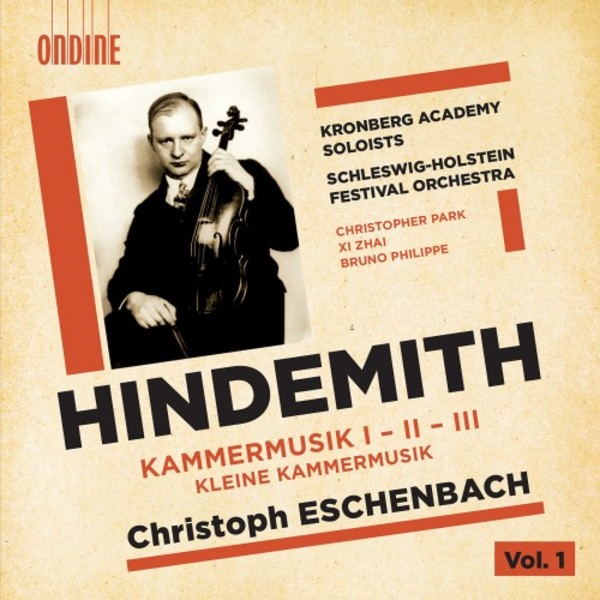 The first volume in a series dedicated to Paul Hindemiths (18951963) chamber works includes the first three works in his Kammermusik series together with Kleine Kammermusik written for a wind quintet. This album continues a successful series of recordings of Hindemiths music together with conductor Christoph Eschenbach. This series has earned him, among others, a Grammy award. These recordings of chamber music have been recorded with a group of young promising artists, including pianist Christopher Park and cellist Bruno Philippe who are playing the solo parts in the Concertos, op.36.

The Kronberg Academy Soloists are outstanding young violinists, violists and cellists who are studying at the institution. Kronberg Academy is today considered one of the most important meeting and training places, and a wellspring of creativity for young string players, and now for young pianists as well. Major concert halls and event organizers regularly invite Kronberg Academy to give concerts in which its students perform together. These include Londons Wigmore Hall, the Louvre Auditorium in Paris, New Yorks Carnegie Hall, Konzerthaus Berlin and Suntory Hall in Tokyo.

Christoph Eschenbach is a phenomenon amongst the top league of international conductors. Universally acclaimed as both a conductor and pianist, he belongs firmly to the German intellectual line of tradition, yet he combines this with a rare emotional intensity, producing performances revered by concert-goers worldwide. Renowned for the breadth of his repertoire and the depth of his interpretations, he has held directorships with many leading orchestras and gained the highest musical honours. He is also well-known as a tireless supporter of young talent  this is his greatest passion, and he values his contribution to mentoring up-and-coming talent over and above his own distinguished career. Since September 2019 he is Musical Director of the Konzerthausorchester Berlin.