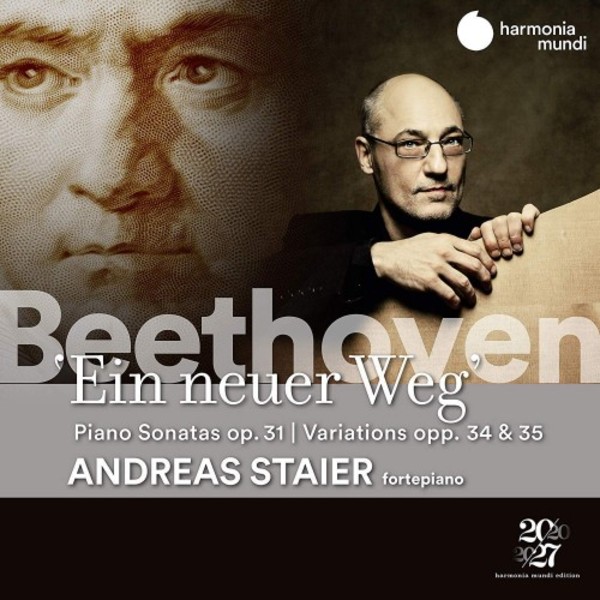 The year 1802 was a decisive one for Beethoven. In the autumn, he wrote the Heiligenstadt Testament, in which he clearly expressed his awareness of the outcome of his inexorably increasing deafness. At almost the same time, he told his friend Krumpholz that he was, not satisfied with his work so far, and he was planning to embark on a new path. The works, skillfully grouped together by Andreas Staier, correspond precisely to that new direction.

Anniversaries are an opportunity for taking stock, but also for reassessment and renewal. This years Beethoven celebrations have already seen plenty of examples, but for a spirit of renewal one of the best examples so far has been Harmonia Mundis ongoing Beethoven Alive! (or 2020/27) series, featuring outstanding new recordings, mostly on period instruments, from many of their major artists. The latest release is from period keyboard expert Andreas Staier, who has already made a name for himself with iconoclastic discs of Bachs Goldberg and Beethovens Diabelli variations. Now he turns his attention to Beethovens landmark Opus 31 piano sonatas, coupled on a double album with two further sets of variations, Opp. 34 and 35, the latter known as the Eroica Variations as theyre based on the same theme (taken from Beethovens early ballet The Creatures of Prometheus) used as the basis for the Eroica Symphonys finale.

All five works can be linked with the New Path (Ein neuer Weg) that Beethoven is said to have claimed he had embarked upon in conversation with his violinist friend Wenzel Krumpholtz in 1802: I am not very satisfied with what Ive written to date. From today I intend to enter upon a new path. Beethoven was referring here specifically to the three Opus 31 sonatas, but in October that year he wrote to the publishers Breitkopf & Hàrtel apropos of the Opp. 34 and 35 sets, I have made two sets of variations  Both of them are worked out in a really wholly new style.  the style in both works is entirely new, and its mine. Although the Beethoven mythology for this period has focused on him coming to terms with his increasing deafness, as vividly recorded in the Heiligenstadt Testament, these announcements of a new path and new style are arguably of even more significance to the launch of a distinctively Beethovenian middle or Heroic period.

As it turns out, the sonatas and variations make an ideal coupling on this new album, with the three sonatas on disc 1, and the variations on disc 2. Beethovens new path consisted above all in a transformation of the way he shaped and handled his musical material, giving it a provisional character that was in a constant state of becoming, of striving for a goal and breaking down many of the old formal and syntactic rules of the Classical school. And the sense of newness and striving is undoubtedly enhanced when this music is performed on a period instrument, in this case a splendid fortepiano by the Viennese maker Mathias Müller dating from around 1810. Its clearly defined treble tones bring a bell-like clarity to the music, while the bass, with less bloom than a modern concert grand, is remarkably focused, never clouding the textures.

Staiers performances are, by his own standards, relatively restrained in temperament but beautifully judged in terms of tempo, dynamics and phrasing, with a lightness of touch that gives the sonatas in particular a palpable sense of freshness  just whats needed when embarking on a new path. Theres no lack of power, for instance in the celebrated opening movement of the Tempest Sonata, op.31 no.2, but this never impedes the musics forward thrust. The Müller instrument is arguably at its best, however, in the filigree passages of the Adagio grazioso slow movement of op.31 no.1, as well as its breezy outer movements, the final movement of the Tempest (where that focused bass really comes into its own!), and throughout op.31 no.3, where it lends real character to the Scherzo and Minuet movements and responds beautifully to Staiers deft touch in the Presto con fuoco conclusion.
The Variations are every bit as successful, the Beethovenian temperament of the Op.34 set coming across with exceptional vividness, especially in the second and fifth variations, while the final variation again has an enchanting delicacy about it. But its the Opus 35 set that is the real masterpiece here, and under Staiers hands it emerges gradually, as the various components of the theme and its bass are explored and worked out, with a real nuttiness to the punctuating repeated B flats (caused in part by distinctive upper partials). The grace-note thirteenth variation is particularly enjoyable, and the whole set, which unfolds with a quasi-improvisatory feel thanks to a tasteful employment of ornament and rubato, builds impressively to a splendidly delineated and shaped account of the concluding Fugue.

Even listeners who already have favourite recordings of these works should hear these new accounts. Staier blows away the cobwebs while preserving the musics greatness, rediscovering its astonishing sense of newness: an emergent style that was to have profound effects on the course of music in the Romantic era. These are performances that really make you think again about this music, renewing and reassessing a remarkable legacy.