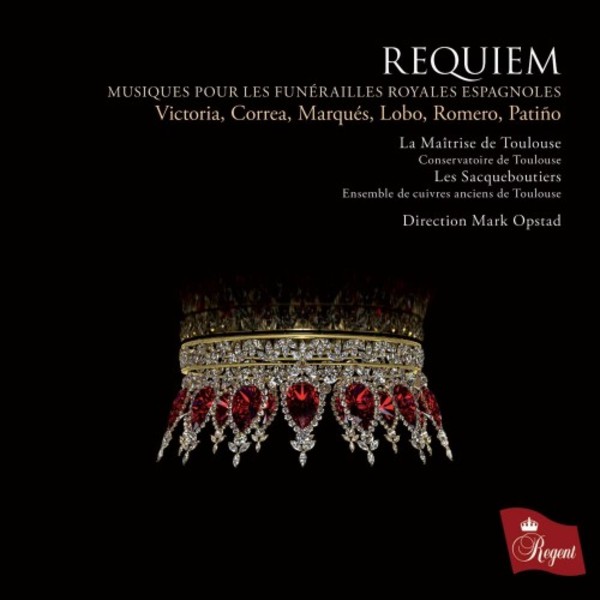 The inspiration for this recording was the desire of both La Maîtrise de Toulouse and Les Sacqueboutiers, the renowned Toulouse ensemble of early brass instruments, to collaborate on an original programme which would highlight the unique quality of combined childrens voices and wind instruments of the Renaissance. One of the most famous works of this period, Victorias Requiem lent itself particularly well to this idea, and that a performance combining the niños cantorcicos, as the choristers in Spain were known, and the ministriles, wind players attached to cathedral churches, could create a fresh impression of the sonorities usually associated with this work. It is the centrepiece of this programme of music for a Royal Spanish funeral.

Since its formation in 2006 La Maîtrise de Toulouse under its founder and director, Mark Opstad, has established itself as one of the worlds great childrens choirs. It was created within the Toulouse Conservatoire, and was the first choir school structure in South-West France. La Maîtrise provides a specialised musical education which has resulted in a highly acclaimed vocal ensemble. In 2017 La Maîtrise de Toulouse was awarded the Prix Liliane Bettencourt for choral music. The formation of adult tenor and bass sections has enabled the choir to perform the full range of sacred choral music.

Its numerous CD recordings have been widely praised in the international music press, including 5 Diapasons in France (twice), essential release in the Sunday Times, 4 stars in BBC Music Magazine, favourite choice on France Musique radio, and a critics choice amongst all the CDs reviewed in 2012 by the American Record Guide.

Since their creation in 1976, Les Sacqueboutiers have dedicated their work to the rediscovery of early brass instruments and to the vast repertoire of the Renaissance, the golden age for these instruments. They have established themselves as one of the most imaginative ensembles of the early music scene. Their striving for excellence remains the prime motivation for their work.

A childrens choir to rival the finest. - MusicWeb