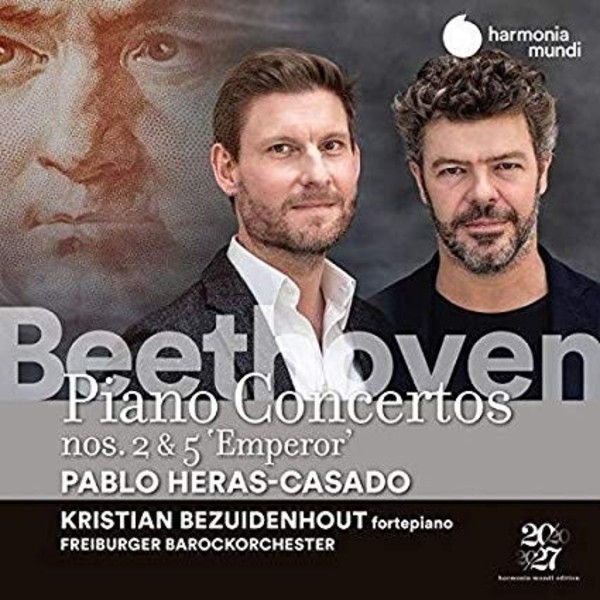 Beethovens five piano concertos relate, in a sense, part of the composers life: some twenty years during which a young musician from Bonn made several revised versions of the first concerto he wrote (a springboard to Viennese success that ended up being called no.2), before becoming the familiar Emperor of music embodied by the brilliant inspiration of no.5. Two hundred and fifty years after his birth, it is with these two extremes that Kristian Bezuidenhout, Pablo Heras-Casado and the Freiburger Barockorchester have chosen to start an exciting period-instrument trilogy of the concertos that bids fair to be a landmark!

Unless youve spent the last three or four months at the outer reaches of the solar system, youll know that 2020 is Beethoven Year, marking the 250th anniversary of the great composers birth. Although the anniversary itself doesnt fall until mid-December, record companies have been falling over one another to celebrate the occasion. While the big labels have been busy releasing vast box sets of Beethovens complete works (notably Deutsche Grammophon, Warner and Naxos), smaller independent companies have focused instead on single releases, often with imaginative twists or choices of repertoire. Somewhere in the middle, however, is the much-respected French label Harmonia Mundi, who  just as they did for 1918s Debussy centenary  are cutting a distinctive dash by making new recordings of key works with some of their finest artists. Their Debussy series was a big hit with collectors, beautifully presented and featuring some outstanding performances. And early signs are that their Beethoven 2020/2027 series will be similarly impressive. René Jacobs recording of Leonore has already won high praise; and forthcoming releases include a new symphony cycle with some fascinating couplings (Gossec, Méhul and Knecht among them) shared between the Akademie für Alte Musik Berlin, Freiburger Barockorchester and François-Xavier Roths Les Siècles, as well as selected piano works from Andreas Staier, Nikolai Lugansky and Paul Lewis.

Another key component of this eminently collectible series is a new cycle of the Piano Concertos from fortepianist Kristian Bezuidenhout with the Freiburger Barockorchester under Pablo Heras-Casado. There have been several notable period-instrument performances of these repertoire cornerstones over the years, from Robert Levin, Steven Lubin and Melvyn Tan to Ronald Brautigam and the iconoclastic, chamber-scale Arthur Schoonderwoerd. On the evidence of this first disc, Bezuidenhout is every bit their equal, playing a sweet-toned copy of an 1824 Conrad Graf instrument that is beautifully balanced against the excellent Freiburg orchestra. One of Beethovens primary concerns was how to make his instruments sing, and Bezuidenhout knows exactly how to do this without losing that distinctly Beethovenian toughness.

For this first release in the cycle, Bezuidenhout pairs the earliest of the canonic piano concertos, no.2 in B flat major (1788-1801, published after the later C major no.1, hence the wrong numbering) with the last, the mighty Emperor Concerto in E flat of 1809, and they make an exceptionally satisfying coupling. In the B flat Concerto, the debts to Mozart are obvious, especially when, as here, the piano plays along, continuo-style, in the tuttis. Yet Beethovens individual voice is already abundantly evident, in the sudden dynamic contrasts, forceful tuttis and harmonic jolts. Theres a splendid robustness to the textures in the opening Allegro in this performance, thanks in particular to the feisty playing of the Freiburg lower strings and horns, but Bezuidenhout has a wonderfully fleet way with the passages of figuration, imparting (as Beethovens own performances certainly would have) a semi-improvisatory feel to the solo part. Rather than use Beethovens own anachronistic 1809 cadenza to the first movement, Bezuidenhout opts for Levins, as featured on the latters Archiv recording with Gardiner, and it works wonderfully well here. The central Adagio has a beautiful inward poise and nobility (anyone who doubts the ability of the fortepiano to offer subtlety of tone should definitely hear this), while the rollicking Rondo finale, with its spirited Scotch snaps, is an absolute breeze, while maintaining the performances unerring sense of longer line and beautifully-judged tempi.

The Emperor Concerto, placed first on the disc, has similar strengths, bolstered by its larger scoring and inbuilt grandeur. Here again, Bezuidenhouts concern to give the piano part a quasi-extemporised flavour pays dividends, with fine attention given to agogic details, phrasing and dynamic shading. Time and again one senses that with these performances period performance of the piano concertos has finally come of age, for this seems to be the perfect marriage of historically-informed insight with profound musicality. Under Heras-Casados clear-headed direction the tuttis of the opening Allegro have plenty of heft, contrasted with exquisitely-poised quieter passages that prepare the ground for the dreamy central Adagio, where the rhythmic freedom Bezuidenhout allows himself on the return of the main theme is one of the discs many spine-tingling moments. The transition to the Rondo finale has the sort of tension that only period instruments can bring, and theres real brilliance and palpable enjoyment to the solo playing here to crown a performance of rare distinction. The relatively close recording in Freiburgs Ensemblehaus puts one in the acoustic of an early 19th-century palace or theatre rather than a later Romantic-era concert hall, very much of a piece with the performances themselves. For those wanting a concerto cycle to celebrate Beethoven Year, this is a terrific one to recommend!

[Bezuidenhouts] performance of the Emperor concerto is scintillatingly dramatic, heroic, deftly articulated and, above all, fresh; and the instrument he plays seems to possess plenty of power. The Second Concerto is given equally enticingly... both readings are enhanced by the brilliantly coloured playing of the Freiburgers under Pablo Heras-Casado.  Stephen Pettitt
The Sunday Times 26 January 2020

[Bezuidenhout] and Heras-Casado have thought deeply about how best to make these pieces sing. ... First up is the Emperor Piano Concerto, No 5: Bezuidenhouts entry is imperially grand, but although he takes all the time he wants, he doesnt hang around. A hint of playfulness comes through even here; indeed, its a strong feature of the performances as a whole. ... the two slow movements are convincing as episodes of reflection; that of the Concerto No 2, which recedes into stillness and memory at the end, comes across with more profundity. But what marks this recording out is the way they make the music dance  as if no one is watching.  Erica Jeal
The Guardian 20 February 2020

One of the choicest offerings thus far this celebratory Beethoven year is the powerfully compelling collaboration of Kristian Bezuidenhout and Pablo Heras-Casado with the Freiburger Barockorchester in the Second and Fifth Piano Concertos. ... discerning intelligence and imagination, qualities weve come to expect from Bezuidenhout, are here in abundance. But other attributes  his playful sense of the improvisatory, his ready ear for humour, not to mention his ability to imbue every gesture with emotional authenticity  seem particularly suited to the concertos... In addition to creating sounds of startling beauty  the entrance of the horns at the end of the cadenza in the Emperor!  Heras-Casado and the orchestra seem intent on letting Beethoven be Beethoven. ... I doubt that Beethoven, at least recently, has sounded quite so original or so much fun.  Patrick Rucker
Gramophone March 2020