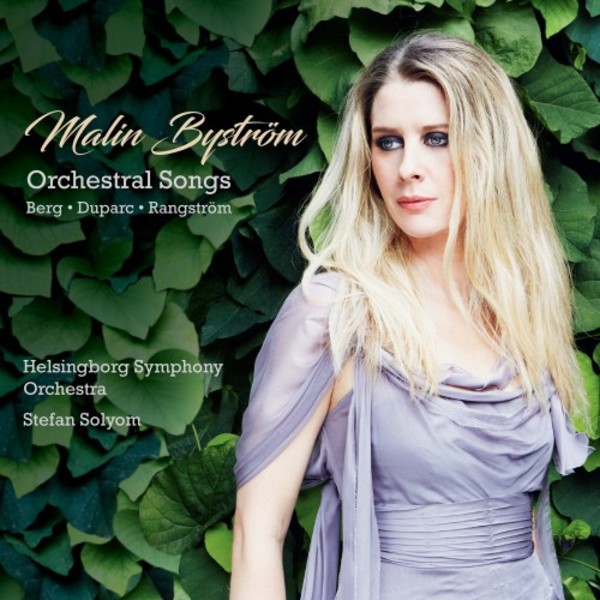 This is Malin Byström's debut album (solo) with orchestral songs by Ture Rangström, Austrian Alban Berg and Duparc. Recorded(2019) together with Helsingborg Symphony Orchestra under the direction of the chief conductor Stefan Solyom.

Malin Byström is a Swedish soprano, trained at the University College of Opera in Stockholm. She has been coached by Jonathan Morris since 1997 and collaborates with him, still to this day. In 2016 Malin Byström received the Litteris et Artibus medal and in 2018 she was appointed Hovsågerska (Court Singer) by H.M. the King. She was named Female Singer of the Year in the 2018 International Opera Awards.

Malin Byström has appeared on many of the worlds great stages, such as Festspielen in Salzburg, Bayerische Staatsoper in Munich and Palau de les Arts in Valencia with Plácido Domingo. She has sung the Countess in the Marriage of Figaro and appeared as Donna Anna under the leadership of René Jacobs in a performance that has been released on DVD. On the concert stage, Malin Byström has sung Wagners Wesendonck Lieder with the Helsingborg Symphony Orchestra and made a number of performances under the direction of Kurt Masur, including Mendelssohns Elias, Beethovens Symphony no.9, Peer Gynt, Sibeliuss Kullervo together with the French National Orchestra, and Strausss Vier letzte Lieder with the Royal Swedish Orchestra.

In December 2013 she was the soloist at the Nobel Prize Ceremony in Stockholm Concert Hall. Her Mathilde in William Tell with Orchestra dellAccademia Nazionale di Santa Cecilia and Antonio Pappano has been published on CD.