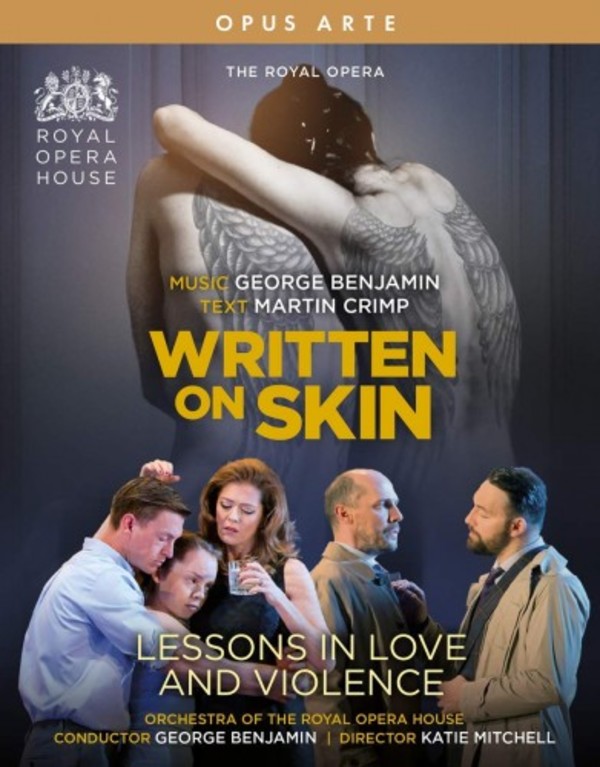 Benjamin - Written on Skin, Lessons in Love and Violence (Blu-ray)

Lessons in Love and Violence
Written on Skin

Lessons in Love and Violence
Written on Skin

Two modern masterpieces are brought together for the first time.

Written on Skin has been hailed as magic and irresistible  the best opera written over the last twenty years (Le Monde). It tells the story of a cruel and powerful Protector who asks a mysterious Boy to create an illuminated book to celebrate his wealth and family. He invites the Boy into his home, little realizing that this will lead to a journey of startling, joyful and ultimately tragic self-discovery for his oppressed and much younger wife Agnès.

Drawing on the real-life relationship between Edward II and Piers Gaveston, Lessons in Love and Violence explores how personal relationships can have fatal political consequences. The King lives in a close but uneasy relationship with his wife Isabel, their two children and his lover Gaveston. When the King banishes his military advisor Mortimer, he sets off a chain of devastating events.

The composer conducts two superb international casts, including soprano Barbara Hannigan, who appears in the leading roles of Agnès and Isabel.

George Benjamin and Martin Crimp have done it again...  The New York Times (Lessons in Love and Violence)

Hailed as a 'triumph' at its premiere in Aix-en-Provence in 2012, 'Written on Skin' has quickly established itself as one of the essential 21st-century operas.  Gramophone (Winner of the Gramophone Award 2014  Contemporary)

Crimp knows how to leave room for music to amplify his points  which Benjamins fascinating score does with boundless technical skill and unceasing eloquence. The composer conducts an outstanding performance.  The Stage ★★★★★ (Lessons in Love and Violence)